Anemones – Flowers Of The Sea 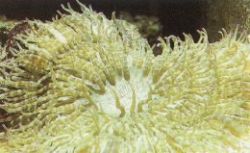 These ancient animals occupy all the oceans and seas of the world and species are to be found throughout the very coldest to the very warmest regions, such is their ability to diversify and adapt, albeit over aeons of time.

Anemones are very closely related to stony corals, but whereas stony corals are made up of polyp colonies, anemones can be seen as one large polyp. Accordingly, the structure of an anemone is extremely simple and has changed remarkably little over millions of years. They are basically a ‘bag of skin’ which is inflated with water to give form. Many species have a sucker-like foot used to cling onto rocks, whilst in others the foot is more adapted to burrowing. Above the slender body is a disc with a mouth in the centre and tentacles radiating out from the middle. Every tentacle is tipped with a battery of stinging cells called nematocysts and these are used to deter predators and capture prey. Each nematocyst is spring-loaded with a hollow, barbed thread, through which a paralysing poison can pass. The firing of each cell is governed by it coming into contact with anything edible – any structure lacking in protein usually fails to trigger the firing mechanism e.g. algae. Once ensnared by the barbed hooks, the prey is then passed through the tentacles and continually stung until it ceases to struggle, finally being engulfed by the central mouth. The fierceness of the sting varies from species to species and some are capable of producing a nasty rash in humans.

Anemones are to be found in many attractive hues; green, yellow, red, pink and purple. But in nearly all cases the underlying colour is brown. This colour is brought about by the presence of a single-celled algae called zooxanthellae which lives within the tissues of most species. The relationship is truly symbiotic with the anemone deriving oxygen and nutrients from the algae, whilst the algae has a secure home in bright sunlight and can utilise the anemone’s waste products, such as carbon dioxide to photosynthesise. Without the benefits of zooxanthellae, most species of anemone find survival almost impossible.

Reproduction may be by division, ‘budding-off’ tiny versions of the mother animal or sexually, producing eggs and sperm. Many species have multiplied successfully in captivity under favourable aquarium conditions.

Clownfish are most often pictured in association with anemones, but this is only part of the story as many species are unsuitable and in the case of the Caribbean there are no clownfish to take advantage of their particular protection. However, some species of shrimp and crab do have a similar relationship with those particular anemones. 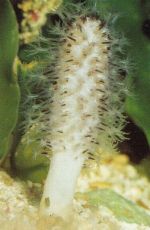 These fascinating animals are very closely related to anemones, although distinct in appearance. Whilst only seen in the hobby from time to time, many hobbyists will be quite unaware as to just what they are and how to maintain them.

Sea Pens have a tubular body, the upper portion of which is supported by an internal calcium spine, somewhat resembling an old-fashioned writing quill; hence the common title. Like anemones, they possess a foot which enables the animal to burrow and anchor itself safely in the turbulent water it prefers to frequent. Being mostly nocturnal feeders, Sea Pens are rather uninteresting during the day, with only a white, buff, yellow or orange column protruding from the substrate. As darkness descends, the animal begins to expand and body is covered in a mass of feathery polyps, ready to feed on any water-borne food particles. The most commonly available species is Cavernularia obesa.

Sadly Sea Pens are not straightforward to keep. They require the same optimum water conditions as anemones and frequent feedings of live rotifers or brineshrimp nauplii; usually during the hours of darkness! They also require a suitably deep substrate into which they can burrow. Approximately 3in (5cm) of coral sand should be provided. They do very poorly in aquaria without an appropriate substrate. 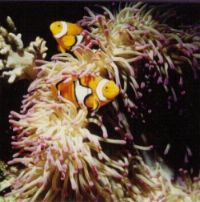 Contrary to popular belief, anemones are very sensitive and not really that suitable for newcomers to the hobby. They require excellent water conditions and intense lighting of the correct quality. It is usually best for beginners to gain valuable experience with less sensitive marines, preferably fish-only, before advancing onto the more delicate invertebrates such as anemones. It is possible that some ailing specimens may be revived by placing them directly under intense lighting such as metal halide and considerably improving the water conditions.

One of the most frustrating aspects of keeping some species of anemone is their inclination to move about the aquarium, generally settling in a totally unsuitable location as far as viewing is concerned. Primary reasons behind this behaviour include poor water conditions, insufficient lighting. The anemone, by ‘wandering’, is searching for a more favourable spot in which to settle, where all its requirements will be met. In the absence of correct conditions, the anemone will continue to move about. If an anemone moves into an unfavourable position it is best not to move it. Moving the anemone will damage its foot no matter how careful you are, and of the anemone of course, may decline its new position, only to move back to where it was originally!! Sometimes anemones settle on the front viewing glass and in this case a move can be excused. However, the utmost care must be exercised and the foot eased off the glass very gently. In all cases, remember that these are living creatures and deserve the best conditions, even though it may not occasionally suit the hobbyist. 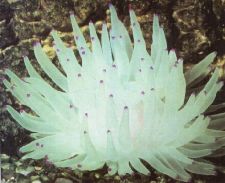 As we have seen, anemones can be seen simply as bags of water. When fully inflated, the water is under slight pressure which gives the animal its form. Oxygen and nutrients are also absorbed from this ‘captured’ water. After a while, the water becomes stale and has to be exchanged for a fresh supply. To achieve this, the anemone deflates for a short period of time, expelling the unwanted liquid and accompanying waste products. A healthy anemone will generally complete the whole process within 5-24 hours.

Most fish seem to possess an instinctive caution when it comes to anemones, but very small fish may fall prey to their stinging tentacles, especially during the hours of darkness. Therefore, it would be unwise to house very small and slow moving fish in the same tank. 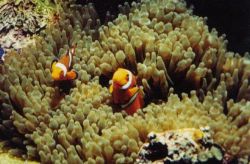 Any anemones falling into the genera Heteractis (formerly Radianthus), Anthopsis and Stoichactis are suitable. These are all commonly available to the hobbyist. Condylactis and Pachycerianthus species should be avoided as far as clownfish are concerned being exclusive to the Caribbean where there are no clownfish; they are best kept in an invertebrate-only tank because of their highly predatory natures. Clownfish often require a ‘settling-in’ period whereby they adapt to a new anemone. In the process they may get stung, or even consumed by the anemone. 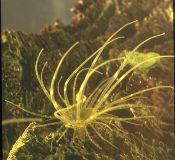 Triffid, Glass or Rock Anemones (Aiptasia sp.) can present a real nuisance to the marine aquarist. These small 1-2in(2.5-5cm), brownish anemones can quickly multiply into plague proportions and will ensnare any small fish that gets too close. They can also be very difficult to eradicate.

Touching most healthy anemones can produces a slight sticky, stinging sensation, or even a rash, depending on the species. However, some people may be allergic to the poison and a reaction may take place. This usually takes the form of a rapidly spreading rash, or in rare cases anaphylactic shock (complete collapse of the respiratory system). Both require immediate hospital attention. Try not to let anemones sting on sensitive areas of the skin, such as the forearms or backs of hands. Carpet anemones (Stoichactis sp.), Condylactis sp. and Tube Anemones (Pachycerianthus sp.) all posses ferocious stings and should not be touched with bare skin if at all possible. Heteractis species must also not be ignored as these too can distress sensitive humans.

If accidentally stung rinse the wound with vinegar or alcohol and then apply a paste of equal parts sodium bicarbonate and water. Once the pain begins to subside, or the paste dries out, apply a dusting of talcum powder or papain which is a meat tenderiser used in barbeque cooking as this has an ingredient that can neutralise venom. This treatment can also be used to relieve the pain from the stings of venomous fish. 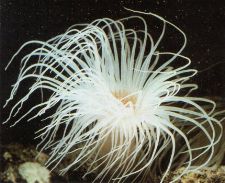 If an anemone is attached to a rock, rather than remove it and risk damage, purchase the rock as well if practicable. Never buy anemones that are very pale or white and have obviously lost their symbiotic algae. Refuse anemones that are unattached and rolling about the stock tank.

A healthy anemone can be fed small pieces of appropriate food once each week to keep it in good condition. Suitable foods include lancefish, squid, cockle and mussel. Small pieces should be lightly pressed into the tentacles and never forced into the mouth as this will cause serious damage. If food is rejected, remove it and do not try again for another week. Many anemones will remain perfectly healthy without such gross feeding, taking adequate nutrition from their zooxanthellae exclusively. In addition, where fish are kept in the same tank, the juices from the frozen fish food often proves sufficient to keep an anemone healthy. Nuisance anemones such as Aiptasia sp. must not be fed if they are to be kept under control; gross feeding only encourages rapid multiplication.

The most common ailment is for anemones to go white, shrink and eventually die. This can be due to several factors including lack of light, poor water quality, or lighting in the wrong colour spectrum. As we have seen, anemones possess a symbiotic algae within their tissues and as this dies the anemone loses its colour and shrinks in response to a lack of nutrients and oxygen usually supplied by the algae. Once the process of degeneration has begun, the anemone may lose its power to attach and roll about the aquarium. Death usually follows soon after. It would be fair to say that this scenario is much more likely to happen with the clownfish-types (e.g. Heteractis spp.), rather than the hardier Caribbean species. Once an anemone starts to break up and disintegrate, it should be removed from the aquarium immediately, thus avoiding massive pollution. 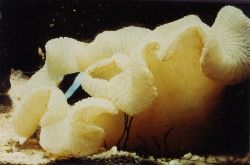