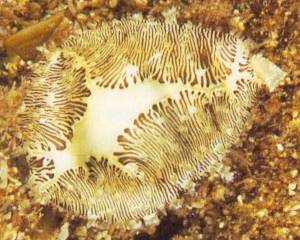 It is probably true to say that cowries are of more value to shell collectors than to marine fishkeepers; for although they possess some attractive qualities such as the often beautiful shells, in the reef aquarium they are capable of causing considerable inconvenience. Still, they are popular with marine aquarists and I no reason to omit them from our thoughts completely.

It is interesting to note that cowries were once used as "money" by some Indo-Pacific Cultures. The common Money Cowrie (Cypraea moneta) was collected and arranged in strings that were traded for goods. (Perhaps western society might benefit somewhat from this way of thinking!).

Cowries are univalves that generally remain hidden during the day. When darkness falls they emerge to forage, dislodging many carefully positioned corals with their powerful foot.

Although a few species are herbivores, the vast majority are carnivores and will feed on sponges, gorgonians, soft corals and other sessile invertebrates. Even those species that enjoy a diet of macro algae regularly turn their attention to living corals, often to the great dismay of the hobbyist.

The attractive shell is a hard, highly polished dome and is usually fully, or partially, covered by a relatively uninteresting fleshy mantle that provides efficient camouflage against predators. 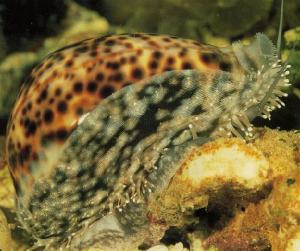 Some of the most suitable species for the marine aquarium include:- The Tiger Cowrie – Cypraea tigris, C. arabica, C. moneta, C. pantherina and C. nucleus.

Quite often, cowries can be accidentally introduced into the aquarium. If observed carefully they can sometimes be seen clinging to the sea fans and sea whips on which they feed. Cyphoma gibbosum from the Caribbean is a good example of this.

Cowries demand the higher water quality generally found in the invertebrate aquarium and are not suitable for the fish-only tank. Indeed, a species aquarium would provide the ideal situation. 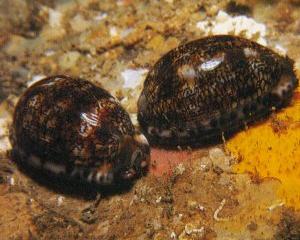 Most cowries identified in the text will graze on micro and macro algae such as Caulerpa sp. supplemented with lancefish and shellmeat. But it has to be mentioned that the vast majority of cowries are carnivorous and species should be chosen carefully.

Given good water conditions and a balanced diet, cowries suffer no particular afflictions. An obvious sign of declining health is the shrinking of the fleshy mantle that envelopes the shell.