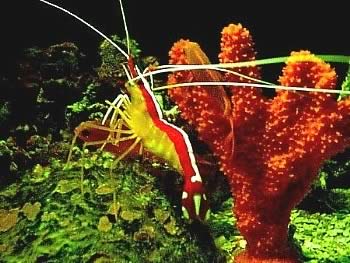 Newcomers, beginners, novices, call them what you will, are the lifeblood of our hobby. They are often confused and discouraged by the ‘rocket-science’ offered by hobbyists at the other end of the scale (and THEY were all newcomers at one time don’t forget!). This is a pity, for without fresh input, our hobby would soon start to decay!

If you are new to the marine fishkeeping hobby, I offer you a personal welcome and will do everything I can to make your transition to experienced enthusiast as painless as possible. If you have not already read the FAQ’s page then you will find plenty of basic information there to think about.

Books are a great source of information and I would also direct you to that page for a selection of the best around.

Remember, the more time you spend reading and planning, the better your showtank will be. Buying in haste often leads to major disasters. So, visit as many aquarist shops as you like BUT leave your money at home!
(You can’t spend what you haven’t got). Return ONLY when you are sure it’s what you want.

Short articles covering the very basics of the hobby will appear on this page. They will be changed from time to time, so do come back regularly.

Invertebrates are endlessly absorbing creatures. They so often possess a wide-ranging compliment of qualities much beloved of marine aquarists: spectacular colour, intriguing patterns, unusual form, engrossing behaviour, exotic appeal and a great sense of challenge. However, successful invertebrate keeping demands that the challenging aspect of these wonderful animals is properly addressed in full by budding marinist.

The terms 'easy' and 'hard' are often used when describing invertebrate constitution and adaptability to aquarium life but,in reality, there are only degrees of sensitivity. ALL invertebrates are sensitive. They universally respond very badly to poor water conditions and and in many cases require special lighting and/or feeding techniques. Others demand a particular substrate or a range of suitable caves. It often seems a far cry from the relative simple fundamentals of the fish-only aquarium, but a good grounding in the basic skills of marine aquarium husbandry is best learnt by adopting this route and must be regarded as essential to on-going success.

In addition to a thorough knowledge of marine basics, the aspiring invertebrate keeper should never be without a selection of good books on the subject (see reading list), access to a knowledgeable and experienced specialist marine retailer, and some idea of the correct selection of invertebrate species to begin with. Contrary to popular belief, invertebrates need not be difficult to be fun. Some of the less sensitive species conform to all the criteria listed in the opening paragraph and success with these can leave the marinist with a great sense of satisfaction and achievement. So, without further delay, let's explore the possibilities!

All too often the mention of invertebrates brings to mind an animal that is restricted to one particular spot. Shrimps, on the other hand, shatter that image as they are fully mobile and can (and do) wander freely about the aquarium. All shrimps are crustaceans with a hard external skeleton; they are also decapods, meaning that they have ten legs usually arranged in five groups of two. Some of the forward legs may have developed in claws. Swimmerettes under the body provide two functions: firstly, they are capable of holding eggs safely until they hatch and secondly, they can be used to provide a useful burst of backward speed if a hasty retreat is called for.

Many species available to the hobbyist are brightly coloured with red and white predominating. This colour combination is often a good indication that in the wild, the shrimp would normally provide a cleaning service to fish. As a result, cleaning shrimps are not shy with the aquarium and soon learn to feed on small morsels of marine fare such as frozen brineshrimp, mysis, squid, mussel and cockle.

Some popular and suitable species include:- Cleaner Shrimps (Lysmata amboinensis and L. grabhami), Boxing Shrimps (Stenopus spp.), Dancing Shrimps (Rhynchocinetes spp.) and Blood Shrimps (Lysmata debelius) I am often asked the difference between a shrimp and a prawn. The answer is, there is none, they are one and the same! 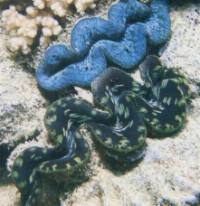 Clams look more sensitive than they really are. Being bi-valve molluscs, they are closely related to mussels and oysters which often live in murky conditions. Food is filtered from the surrounding water by drawing it in through an inlet syphon, filtering it for food particles, and then passing it out via an exhalant tube – hence the term 'bi-valve'. The two syphons are easily identified on clams as the inlet is a long slit through which the breathing and filtering gills can be seen, while the outlet is a small round hole raised on a mound.

Clams require moderate to bright lighting and are quite happy filtering the water for the juices of frozen foods that were introduced for fish that share the same tank. They also possess symbiotic algae within their mantle which gives rise to the varying colours and patterns, and provides valuable sustenance in waters lacking in suitable nutrition but bathed in bright light.

Sand or rocks make excellent positions although the clams will throw out strong threads from a gland where the two halves of the shell meet, to attach themselves to any firm surface such as a gravel tidy, glass or rocks. 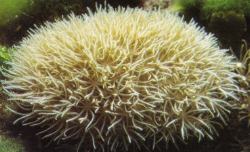 Very often colonies of these small polyps are seen labelled as Xenia, which is quite wrong. Clavularia, as it is more correctly known, can be easily identified as a mass of small star-like polyps emanating from a thin, rubbery-like base. This base is most often purple in coloration and given reasonable conditions, will spread rapidly over rocks, glass or almost any hard surface.

Polyps are to be found in a range of largely subdued colours including brown, green and silvery-grey.

Feeding is unnecessary as the majority of their nutrition is gained from symbiotic algae within the polyp tissues. As a result, moderate to bright lighting is essential. 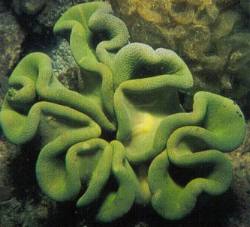 Some of the most consistently successful invertebrates to be kept in the marine aquarium are the soft corals. They are often split into two groups by marinists, with Sarcophyton spp. being commonly known as Leather Corals and Sinularia spp. labelled simply Soft Corals. Sinularia spp. are recognised by their branching habit and relatively short polyps. On the other hand, Sarcophyton spp. are distinctly leathery in appearance and touch (hence the common name), with longer polyps. In addition, they often take on the shape of an overgrown toadstool!

Once again, specific feeding is unnecessary and all soft corals tolerate moderate lighting, although intense illumination really makes them flourish and frequently reproduce by division.

Soft corals cannot be recommended too highly for the aquarist just embarking on invertebrates. 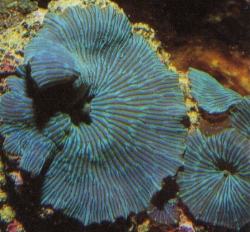 Mushrooms are aptly named owing to their disc-like structure which is occasionally raised on a small stem. They live singly or, more often, in varying sized colonies, on pieces of rock. Diameters vary widely from a 1-38cm depending on the species.

The aquarists will soon realise that mushrooms can be found in a huge range of colours and textures with seemingly endless combinations of each. Red, blue, brown, green, beige and purple are all commonly encountered. Forms include plain discs, striated discs, frilly-edged and dimpled. Such variation has made them a firm favourite with established invertebrate keepers as there is always a wide choice of subjects.

On the whole, feeding is once again unnecessary, although bright illumination and excellent water quality is reasonably important.

Not all tubeworms are suitable for the novice; indeed, many species are difficult even for the most experienced marinist. However, those commonly called Feather Dusters make good subjects. These are to be found in grey/brown parchment-like tubes with feathery crowns. Interestingly enough, the animal is a true worm that has its head at the bottom of the tube and its 'feet' extending as a delicate crown with a combined feeding/breathing function. 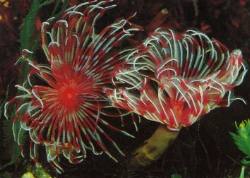 Feather Dusters are best positioned in a sandy substrate but they will still thrive if pushed gently into the cracks in rockwork. Although sensitive to light (the crown will be swiftly withdrawn if a shadow passes) it does not rely on the rays of the sun for nutrition. Small particles are captured in the feathery crown and passed to the central mouth (which is really in the feet, if you're still following!). Therefore, some feeding would be helpful. Squirting live baby brineshrimp or rotifers into the crown occasionally is very useful as are the juices of a mussel squeezed in the immediate vicinity.

Given the correct conditions, Feather Dusters can reproduce quite readily in the aquarium.