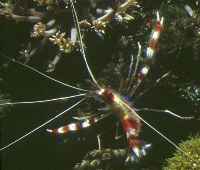 The Boxer Shrimp, also known as the Coral Banded Shrimp, is very popular amongst marine aquarists. The contrast of the red and white bands is beautiful, making this one of the most striking of shrimps. It has large pincers compared to some other shrimps of its size. It is quite aggressive in terms of not allowing other fishes or invertebrates (of the crawly variety), into striking distance. It wards off intruders by stretching out its pincers, ready to attack. This in most cases deters any further advancement by the invader – under aquarium conditions – unless the Boxer is about to become dinner.

Boxer Shrimps are good additions to community aquariums. However, be aware that they are capable of capturing and destroying very small fishes if you have a fully grown or almost fully grown specimen. This is rare, but it does occur occasionally. They tend to be aggressive towards other shrimp species – so if you have more than one variety of shrimp – ensure their quarters are large enough to keep a safe distance. You will find that the larger the Boxer is, the more likely it is to be aggressive towards other species.

Stenopus hispidus can only be kept singularly and will fight to the death if housed with a rival i.e. two males or two females. The exception to this is if you have a pair, then they will live quite harmoniously together.

I may have painted a bit of a dark picture about this shrimp, when actually it is a great addition to many community aquariums. The key to success is to house it with the right inhabitants – that means doing a little research before purchasing this shrimp or before making an addition to your system.

They enjoy plenty of rock work on which to climb, hang on and retreat into when feeling threatened. Extremely long tentacles can often be seen hanging out of a cave without actually being able to see their owner. It is better to house them away from stinging invertebrates, such as anemones, as their tentacles tend to drift into an anemone and get caught. It doesn’t seem to do them any harm, but they really have to tug to break free. 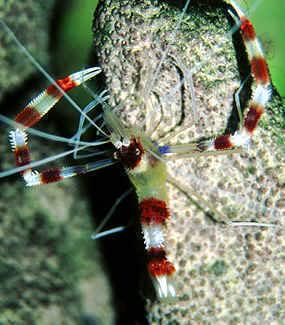 Now that you know the do’s and don’ts, it is quite an easy shrimp to look after. They are fairly hardy and easy to feed. Water quality as with most invertebrates needs to be of good quality. Regular water changes and low stocking levels of fishes will ensure good water conditions. As the exoskeleton largely depends on high calcium levels for its strength – you may have to add supplemental calcium – available at all good pet stores. Calcium concentrations for reef tanks should be between 400 to 420ppm. This will ensure that when the shrimp moults, which it will quite often, that the new exoskeleton hardens effectively, preventing any deformities.

Feeding is simple. A wide variety of foods are accepted, such as: brine, mysis and gamma shrimp, chopped cockle and chopped muscle. They will even eat flake food! If the fishes present clear the food away too quickly they can be fed using a pair of tongs. Having olfactory sensors in their tentacles and pincers they are adept at finding any morsels on the tank floor or in rock crevices.

In captivity they can be expected to live for approximately 2 to 2½ years. A shrimp that’s easy to keep with beautiful markings, makes this a great addition to a community tank.