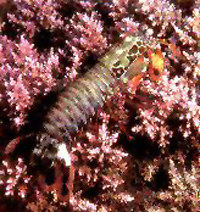 In the sea a number of animals have earned the reputation of being harmful. Indeed, some denizens, such as sharks, stingrays, scorpionfish, sea snakes, and some jellyfish, can be potentially dangerous to swimmers or divers. In order to survive and reproduce, many sea creatures have evolved protective mechanisms against other predators. Some inject venom through biting or stinging, while others deliver electric shocks. Normally, the potential danger to man is minimal, but even small creatures can inflict severe wounds if mistreated. I learned this painful lesson one summer during a collecting dive in the Coral Sea.

While diving along a patch reef between two rocky cliffs, I discovered a small, 6-inch shrimp-like creature peering at me from under a large rocky slab. Its two stalked eyes followed my every move as I carefully lifted the slab. Once the protective rock was over-turned, the shrimp was easily scooped up with my hand-net. In order to examine my quarry more carefully, I reached into the net and grasped the wriggling crustacean. The moment I seized it, a stabbing pain in my index finger forced me to release it. Blood oozed from a half-inch laceration that went down to the bone. Suddenly I realized I was not dealing with an ordinary shrimp, but with a fierce predator that would become a subject of study for years to come.

Known as Mantis Shrimp, these crustaceans are formidable predators equipped with two razor-sharp claws, which are used to capture prey. Like the terrestrial praying mantis, they can snatch prey by thrusting their barbed claws forward with lighting speed, no easy task underwater.

Although called mantis "shrimp", these stomatopod crustaceans are only distantly related to true shrimp, and belong in an entirely different suborder. Over 400 species are distributed throughout tropical and sub-tropical seas, and they are common residents in sandy and rubble substrates, often building elaborate burrows under rocks or coral slabs.

Several species feed on commercial shrimp and are regularly caught in shrimp-trawl nets, occasionally in large numbers. Sorting through their trawl for shrimp, fishermen handle these creatures with respect or, preferably, not at all. They have appropriately given them the name "thumb-splitters" because the mantis shrimp's sharp claws will inflict severe cuts if handled with bare hands.

Mantis shrimp resemble the small, terrestrial praying mantis in appearance, but some of the more formidable species grow to over 16 inches in length (no praying mantis ever reached this size). Even the tiny inch-long pigmy mantis shrimp, Gonodactylus zacae, is an aggressive predator, always searching for food. Armed with razor-sharp, jackknife claws, they can seize small fish with incredible speed. The strike of a mantis shrimp is thought to be one of the fastest movements in the animal kingdom, taking less than 1/1000 of a second.

The claws of the smashing mantis shrimp are modified into heavy hammer-like protuberances used to strike the protective armour of hard-bodied animals. With repeated blows of awesome power a large individual can actually break open clams, snails, or crabs to feed on the soft tissues. A large 12-inch captive peacock mantis shrimp, Hemisquilla ensigera, was reported to have cracked the safety glass of its aquarium. Biologists have reported the strike of the club-like claws of large smashers to have the power of a .22 calibre bullet!

The hunting strategy of a spearer is similar to the praying mantis, but its prey consists of small fish, shrimp, and other soft-bodied creatures. In striking position, the spearer stalks its prey. When the prey is within reach, the spearer thrusts its barbed claws forward with incredible speed, impaling the prey between the jackknife blades. An 8-inch spearing mantis shrimp can devour a 5-inch fish in about four minutes.

Although the claws are primarily hunting weapons, they are also used in territorial combat. When two smashers fight, the defender will lie on its back with its tail coiled up as a shield to block the powerful blows of the aggressor. The tail is heavily armoured with supporting ridges for structural strength to absorb these strikes. After a number of blows, the defender will usually retaliate. Uncoiling, the defender exchanges blows until the attacker assumes the coiled defensive posture. Often territorial battles last 15 minutes or more, and usually end with one of the combatants retreating. Once defeated, an individual has the surprising ability to later recognize the victor and avoid any future confrontation. This ability was once thought to be restricted only to vertebrates.

Territorial battles occasionally result in damaged or missing limbs, and, like all crustaceans, mantis shrimp must molt their outer shells to repair these appendages. After the molt their exoskeletons are soft, making them defenceless against predators and other mantis shrimp. Consequently, many are injured and killed during this period. Some species are even cannibalistic. A crustacean shell normally hardens in one to two days.

In addition to their protective support structure, the tails are often brightly coloured or ornately sculptured. The tails of the peacock mantis shrimp and the Pacific green mantis shrimp, Odontodactylus scyllarus, are decorated with brilliant eyespots hidden under sliding flaps. It is believed that these spots startle a would be predator. This is similar to the startling eyespot displays of some butterflies and moths.

The uncommon spinetail mantis shrimp, Echinosquilla guerinii, has a tail that mimics a sharp-spined sea urchin. If attacked by a predator or threatened by another mantis shrimp, this species retreats headfirst into a crevice or burrow, blocking the entrance with its urchin-like tail, and discouraging the pursuer from further attacks.

Inch for inch, mantis shrimps are among the most powerful of all invertebrate predators. Although their predation strategies seem particularly ferocious, they are, after all, engaged in a quest for survival.