Most of my regular readers will already be aware that, on the whole, I do not condone small marine tanks; that is, tanks with a nett volume of less than 20 gallons (91 litres). They are usually very unstable as far as water parameters are concerned and subsequently exert considerable stress on fish and/or invertebrates. They are also extremely restricting for livestock and consequently prone to overstocking, especially where fish are involved.

Having said that, there is a way that the marine enthusiast can set-up a ‘micro’ marine aquarium housing only shrimps! Over recent years, I have been experimenting with 3-5 gallon marine aquaria containing various species of tropical and temperate shrimp and crabs. I am pleased to report that all tanks were successful and no livestock was lost. 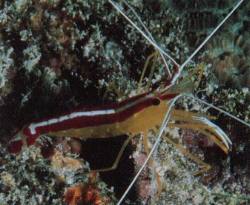 Shrimps make excellent subjects for an aquarium of this type as they are largely sedentary and require little space. In addition, it is possible to peacefully intermix various species. Resistance to disease and varying water parameters seems to be higher than many marine creatures. Given that they are colourful and relatively interesting, shrimps have proved an ideal option.

Almost any design of could be used but I chose tall, thin models which were interesting architecturally, such as an hexagonal tank. All had a capacity of 3-5 gallons (13.5-23 litres). The filter in most tanks consisted of modular filter plates, one air-operated uplift and a modified conventional undergravel filter bed (1″ of coral gravel, gravel tidy and 1″ of coral sand). The uplift was operated by a Rena 101 pump and a long-life air diffuser. A 25 watt mini heater was positioned behind the uplift. Other alternative equipment could feature a small powerhead instead of the air-operated uplift, or exclude the undergravels altogether and install a power sponge filter. In any event, a moderate circulation rate was maintained. There was no protein skimmer or activated carbon fitted to take up valuable space, as large regular water changes negated the need. 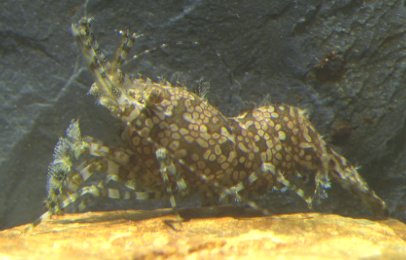 Lava rock was the only decoration and its dark appearance highlighted the bright colours of the shrimps admirably, as did the single 8 watt Gro-Lux fluorescent tube which intensified the red markings so common in many tropical shrimps. It also had little effect on the temperature fluctuation.

Each aquarium was matured in the conventional way, with a proprietary maturation fluid, and livestock was only introduced when ammonia and nitrite readings were zero.

An aquarium of this sort cannot be maintained without regular water changes. The optimum amount appeared to be 33% every week without fail, although 50-80% appeared to do no harm. If the period between water changes was extended, shrimps became lethargic and considerably less interested in food. However, a water change soon revived their spirits, although I have no doubt that losses would have been quickly incurred should these signals have been ignored.

A small aquarium is difficult to keep cool, especially in hot weather, and I suggest that the tank is located in a cool position and erected in the autumn, rather than high summer! 77°F (25°C) is an optimum temperature, although many of my subject tanks showed no ill-effects at 82°F (28°C) for short periods. 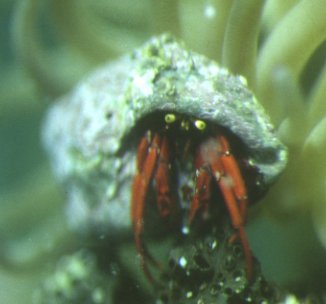 The tank may be small but all the usual parameters need to be the subject of weekly checks. Ammonia, nitrite, temperature, pH, s.g., and nitrate must be monitored regularly.

Modest feeding once a day with brineshrimp sustains nearly all species more than adequately. Every care must be taken not to overfeed. 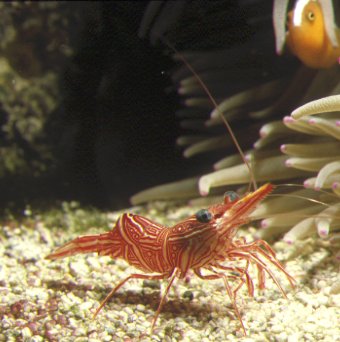 To preserve the integrity of the system NO fish or other invertebrates must be added….EVER! No matter how tempting it may be!

© Nick Dakin (Text & Pictures) May not be reproduced in part, or whole, without permission.