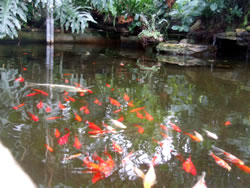 Goldfish have been around for longer than any one person can remember, in fact they were the first fish species to be kept in captivity by the Chinese and were raised to display the best colouration and shape possible by very proud owners at the time. Sadly in more modern times goldfish are considered to be a cheap species to purchase and as such are often housed incorrectly, over the years many myths have emerged which are untrue and totally disregarded by true fish lovers.

In more recent times it became popular to keep these wonderful fish in small bowls or small aquariums, the bowls in fact originated from China where they were used purely to observe the fish as the best view is considered to be from above and bowls were used for this purpose. Thankfully bowls are rarely used nowadays but small aquariums still seem to be used by keepers not realising that these fish need a space to thrive and live long and happy lives. Goldfish are also the choice of many inexperienced keepers so hopefully this article will explain how to care for these fish properly and give an insight into their origins so that more keepers and the actual goldfish will gain more enjoyment as part of their fishkeeping hobby.

Origins of the Goldfish

Goldfish belong to the carp family, they are close cousins to the Koi carp but tend to have a much duller colouration with no noticeable patterns in their colours however they were selectively bred over a thousands years ago when their silver forefathers showed a colour mutation which showed a gold strain. Initially they were bred as a food source but as the gold mutation became more pronounced they became a show fish and have never lost their popularity since. Their Latin name is Carassius auratus but nearly always they are simply referred to by their common name. Nowadays through selective breeding there are many morphs which include Fantails, Comets, Pearlscale, Lionhead and Oranda. These are classed as fancy goldfish and by now show very little resemblance to their predecessors which display the common carp body shape and basic colouration. Despite being classed as the bread and butter of the fish trade they do have special requirements when it comes to caring for these fish and the section below will outline their basic needs in the aquarium.

Well cared for goldfish will have long lives, sometimes they can live for up to 15 years and adults can reach a length of up to 12 inches, hence the need for a large aquarium.

Caring for your Goldfish

Goldfish are a very active species and require a lot of space in the aquarium, the general rule of thumb is to allow at least 10 gallons of water volume on the aquarium plus an extra 10 gallons on top so if you have six specimens in the aquarium the water volume should be at least 10 gallons per fish plus 10 gallons i.e 70 gallons. Many keepers are fooled when they purchase their goldfish as juveniles into thinking that they will not grow large but an adult common goldfish can grow up to 10 inches. One myth is that goldfish only grow to the size of the aquarium, this is wrong, too small a space actually results in stunted and deformed specimens. If keeping fancy goldfish then you should allow 20 gallons per fish so as you can see small aquariums are not suitable for this fish species. Goldfish should never be kept in heated aquariums, they are a coldwater species so please do not add a heater to the aquarium, room temperature is ideal for these fish. I have seen where goldfish have been kept with tropical fish, all this does is increase their metabolism and causes stress in the fish leading to infections and any parasites that are lurking.

Goldfish are high waste producers so the filtration system needs to be working very efficiently. It is best to use a filter that is rated for the water volume and indeed does no harm to use a filter that is slightly overrated to keep the water quality at its best. If you wish to add plants to the aquarium this is fine but the goldfish may decide that they are a food source and nibble on them, it may be wise to use artificial plants, artificial plants nowadays can look like the real thing so look around if you want a natural effect with your aquarium. For the substrate you can use sand or gravel, the choice is yours but if using gravel make sure that it is rounded with no sharp edges that can cause injury to your fish.

One mistake that new goldfish keepers often make is to add the fish straight into the aquarium once it is set up, this is a big mistake even though goldfish are classed as a hardy species they require a fully cycled aquarium to be happy once settled into their new home. Patience is the key so either use cycling bacteria to build up the colonies in the filter media and substrate or you can use ammonia to kick in the beneficial bacteria until they are capable of dealing with the waste produced by the goldfish.

To help out the filters regular water changes will be required, at least 10% weekly, this is a must and will keep the water quality at a high level.

Suitable tank mates for goldfish are basically other fish species that require the same water parameters, the lower temperatures are not tolerated by most fish species available so do your research, another point to remember is that tank mates should not be small species that can also be seen as a food source for the goldfish.

The most popular choice are zebra danios or white cloud mountain minnows which should co-exist without any problems. Always keep a close eye on any new additions to make sure that they are settling in properly and also that they are not being harassed by the original tank dwellers. Test your water on a regular basis to make sure that the filters are doing their job and that the percentage of water changed is keeping the quality high, if not larger water changes may be required and never overstock your aquarium. 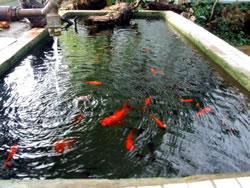 Goldfish are classed as omnivores, they prefer a varied diet so this should be offered in the aquarium. They do eat meaty foods as well as vegetable matter and their needs can be met by feeding with quality commercial feeds but you must be careful and only use feeds that are designed for the needs of your goldfish. General feeds may not offer the same balance as specialised foods so bear this in mind. In the wild goldfish will eat small crustaceans as well as plant matter, if given the chance they will even see small fish species as a source of food. Goldfish feeds can come in flake form or pellets but if you do decide to offer pellets make sure that they are size graded to the size of your fish, i.e. younger and smaller goldfish will require smaller pellets.

To vary the diet live foods should be offered in the form of bloodworms, brine shrimp or daphnia but offer these as treats, you can also supplement the diet with the use of blanched vegetables such as peas or cucumber.

Never overfeed goldfish, like most fish species they will attempt to eat anything added to the aquarium so it is far better to feed small meals a couple of times per day rather than offering one large meal where food could be left and decay in the water column lowering the quality of the water.

Goldfish can take a while to mature and until they do you will be unable to sex them. At 12 months of age this task becomes easier but the obvious differences only stand out when the fish are ready to breed. To guarantee both sexes of goldfish it is best to purchase a group of juveniles and allow them to mature and start to pair naturally.

Just prior to spawning the males will develop small white dots on their gill covers and sometimes on their pectoral fins, these dots are known as tubercles and are a sign that the male is ready to breed. The females will develop a rounder belly as they produce eggs. At this stage it is time to prepare your breeding tank. You will require an aquarium with space, at least 20 gallons and add plants. An air driven sponge filter is the best choice for filtration as you can control the water flow plus the sponges are easy to remove and clean without disturbing the fish too much. Fill the breeding tank with water from the main aquarium but do not fill the tank right to the top, a depth of 9 inches of water is ideal. Spawning mops can be used for spawning sites but some breeders prefer to go without.Adding a heater and raising the water temperature a couple of degrees can help to induce spawning as this replicates the warmer weather in the year, do not raise the temperature greatly though else this could have an adverse effect.

The male will chase the female around the breeding tank and you will probably see him nudging her in the belly area.

When the female is ready she will swim to her chosen spawning site, either plants in the tank or if added, the spawning mop. The eggs will adhere to whichever they make contact with first as they have a sticky coating, immediately after this the male will swim to the eggs depositing his milt to fertilise them. Once spawning is completed it is recommended that the parent fish are removed, you can transfer the eggs to a smaller growing on tank if you prefer but make sure that the water is of the same temperature slowly dropping this to room temperature after the eggs have hatched. The parent fish will see the eggs as a food source so immediate separation will ensure a higher success rate.

When the fry first hatch they are referred to as wrigglers as they attach themselves and are not free swimming, at this stage they will consume their yolk sac so no extra food is required for them. Once free swimming you will need to feed them with small meals several times per day, never overfeed in one sitting or uneaten food will decay and spoil the water quality. First feeds should comprise of newly hatched brine shrimp, daphnia or artemia. Commercial fry foods can be offered but these sometimes lack all of the nutrients that the fry require to grow in size and become stronger.

As the fry grow in size you can start adding flake food which their parents eat but it is advised to crush this into smaller flakes initially.

Jan Hvizdak is the founder of https://fishponds.biz