Big, Bold and Beautiful Fish for The Marine Aquarium! 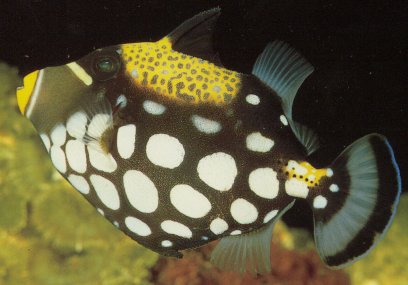 One type of marine aquarium never fails to create a stir, the fish-only tank containing BIG fish! The sight of large slices of brightly coloured piscine flesh cruising around an equally spacious aquarium is enough to make anyone’s heart beat a little quicker. Such displays are normally the province of the public aquarium, but within the confines of a domestic setting the whole thing can be replicated on a somewhat smaller scale with equally stunning results.

There has to be a lower size limit to an aquarium housing big fish otherwise overstocking is quickly going to become a major problem. In addition, keeping large fish in a small aquarium is cruel and stressful, leading to disease, stunted growth and in all probability, a premature death. Of course, juvenile specimens can be housed in smaller accommodation, but the fishkeeper will soon have to make plans for a larger tank.

Most fish that I am about to discuss are going to require an aquarium with the minimum dimensions 6’x2’x2′. Although a larger 8’x2’x2′ would be far preferable and ideal for big fish in a domestic situation. Whilst it is possible to run such a tank on undergravel filtration, this becomes very uneconomic and an undertank trickle filter is not only going to prove cheaper, but also far more efficient at ridding the water of copious amounts of fish waste. A large, efficient protein skimmer must also be regarded as essential and will help tremendously with such high stocking levels. The correct wattage ultra-violet steriliser will help protect valuable livestock against disease, and activated carbon will clear the water of yellowing dyes that might otherwise spoil viewing enjoyment. On the subject of viewing, large tanks will require substantial lighting to illuminate the fish properly so that the impact of colours and patterning may become apparent. A 6ft tank will require at least four full-length tubes spaced equally across its width. I would choose, for instance, 3 x Lifeglo’s and 1 x Marine Glo to accentuate blues, greens and black. Mercury vapour lamps are a reasonable option, but will supply a predominantly yellow light that must be sharpened up with either actinic tubes or Marine Glo’s. Metal halides are an expensive, but ideal choice, and 2 x 150 watt lamps will give an intense natural light. The beauty of both mercury vapour and metal halide lighting is that they create a wonderful rippling effect over the rockwork and base of the tank; very reminiscent of natural sunlight.

Big fish need room in which manoeuvre and only the minimum amount of rockwork should be supplied. A reef wall may look impressive but it will take up important swimming space and displace valuable amounts of water. In all cases, the right balance must be struck for each particular species. 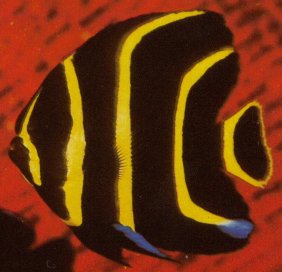 What is a Big Fish?

There are no rules governing what constitutes a big fish; however, any specimen that has attained 6″ (15.2cm) when measured from the tip of the nose to the caudal peduncle must regarded as a good contender. 6″ may not sound a great size (no smutty jokes please!!) but in reality this constitutes a respectable individual. Thereafter, specimens really do start to look big, especially as their girth starts to fill out as well. Some fish, of course, can measure 6″ and still be small; our friends the Morays Eels are a good example (although these will also reach big fish status quite quickly). But these are the exceptions to the rule of thumb and most families e.g. triggerfish, large angelfish, some tangs, porcupinefish, batfish, squirrelfish, large wrasse, boxfish, lionfish, etc. will easily conform to our specifications.

There are a few fish in the trade that will eventually exceed the biggest domestic aquarium, most notable of these are the sharks. The smallest shark can be expected to reach 2 feet (60cm), while the largest may have a potential for 14 feet (420cm)! Far too large for even the most enthusiastic fishkeeper! At the moment, most public aquaria are swamped with unwanted sharks and the marinist must think long and hard before taking on such an enormous responsibility (even though it may initially arrive in a cute little egg pouch!). Needless to say, sharks and other unsuitable fish will not feature in my forthcoming selection. 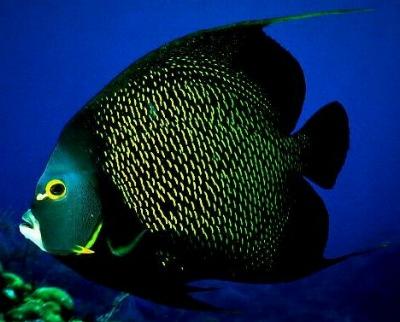 Ideally, a complete fish selection should be planned well in advance and all specimens introduced as juveniles. This procedure has several advantages: firstly, juveniles tend to be more forgiving than adults, especially of others in the same family and more importantly, feeding habits; secondly, a collection of juvenile fish all growing through to adulthood together is likely to be a much more peaceful, cohesive group, presenting far fewer compatibility problems for the owner; thirdly, biological filters can be allowed plenty of time to adapt to the increased loading placed upon them; and last, but not least, there is a great deal of pleasure to be had watching fish develop into a full-fledged adult from what might be a totally dissimilar juvenile. In all cases, patience is the key. For it might be several years before young fish start to look like big fish. The alternative is to plunge straight in and begin stocking with large specimens from the outset. If this route is followed, do not expect an easy ride! There are likely to be compatibility problems leading to fighting or general bullying, as well as dietary and water quality difficulties.

These few specimens are good examples of what the marinist intending to keep big fish should be considering. Compatibility charts are not always an accurate guide as to what can be accommodated in a very large aquarium, so some room for experimentation is possible. There are many other species equally suitable and worthy of investigation. 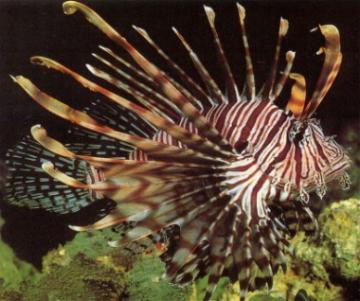 THE LIONFISH (Pterois volitans)  is one of the most commonly available and impressive species. It is generally very peaceful and once acclimatised to dead food, easily fed. The aquarist needs to be aware of the venomous spines and keep hands well clear. Once full-grown, a large tank is essential to allow other fish space to manoeuvre around this slow swimming fish. Other species in the same family can be successfully housed in the same tank, making for a distinctive display. Potential ultimate size: 14″(35cm). 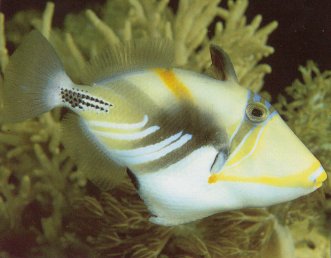 THE PICASSO TRIGGER (Rhinecanthus aculeatus) is not quite as aggressive as some other triggers but it is still potentially the most violent specimen in this selection. Having said that, it is an impressive fish when full-grown, with a colourful body and unusual markings. The Picasso Trigger is very forgiving of less than perfect water conditions and will eat almost anything on offer! Potential ultimate size: 10″(25cm). 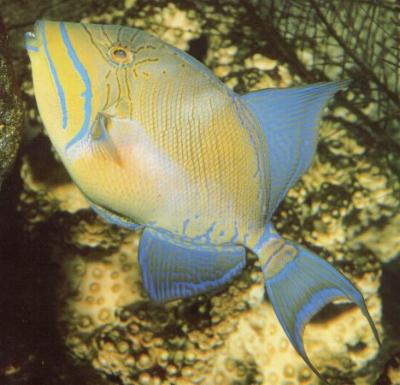 THE QUEEN TRIGGER (Balistes vetula) can occasionally be seen as a very large specimen in dealers tanks, having been returned by hobbyists because they have outgrown their original aquarium. They are not the best tempered of fish but in a spacious enough tank can become an ideal subject. Queen Triggers are very resistant to disease and eat greedily. In the wild they can reach 20″ (50cm), although aquarium raised fish can only be expected to attain ½ – ¾ that size.

THE FRENCH ANGELFISH (Pomacanthus paru) in its early life is superficially similar to the Grey Angelfish (Pomacanthus arcuatus) with a black/yellow livery. However, the French Angel as an adult, is much more colourful. They are easy to maintain at all stages and will accept most marine fare. Potential ultimate size: 15″ (38cm).

THE KORAN ANGELFISH (Pomacanthus semicirculatus) is best purchased as a blue and white juvenile. Given a good diet, it will grow quickly into a large specimen. Whilst the adult Koran Angel may not be as colourful as some of its more impressive cousins, it is generally much less problematic as far as upkeep is concerned. Potential ultimate size: 16″(40cm).

THE LIPSTICK TANG (Naso lituratus) is one of the largest tangs in this family, and one of the most suited to share with other big fish. It has a peaceful disposition and enjoys most marine fare. As it gets older, its markings and coloration intensify, unlike some other tangs which tend to do just the opposite! Potential ultimate size: 10″(25cm).

THE SNOWFLAKE MORAY (Echnida nebulosa) can be purchased as a very small specimen no bigger than a pencil, but with a wide and generous diet will soon grow into a respectably sized fish. Caves or long lengths of pipe in which to shelter are essential to make this generally peaceful fish feel at home. Like the puffer, they are inclined to feed from the hand with the risk of giving the owner an accidental nasty bite. Potential ultimate size: 24″ (60cm). 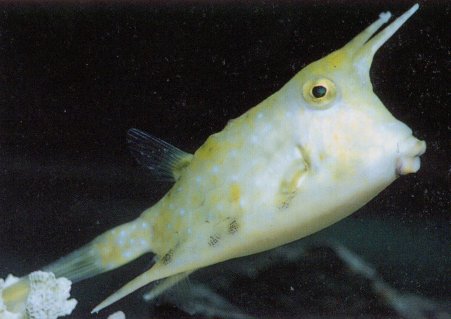 THE COWFISH (Lactoria cornuta) is nearly always for sale as a juvenile of about 2″ in length and most people regard it as a small fish. How wrong they are, for this species will achieve a very respectable size, albeit over a reasonable period of time. Once again, feeding is very easy with The Cowfish accepting a wide variety of frozen marine foods. This peaceful species should be housed away from bullies as they react very badly to constant aggression. Potential ultimate size: 16″ (40cm). 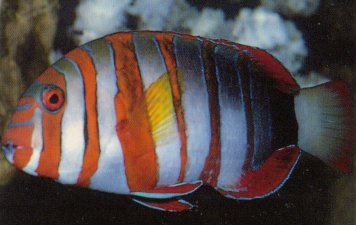 THE HARLEQUIN TUSKFISH (Choerodon fasciata) is a beautiful large wrasse with a mild temperament. It is very colourful at all stages of growth and will accept most marine fare very greedily. Although not very fast growing, it will ultimately be expected to reach 14″ (35cm) in the large aquarium.