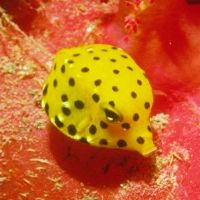 Marinists who follow the hobby closely may have recently noticed that there has been a marked swing away from interest in livestock (fish, invertebrates & algae) to a blanket coverage of hardware, almost to the point of obsession! There are often bitter disputes about who ‘invented’ what, when and how (as if it REALLY matters!). Filtration systems come in and out of favour like so many different clothes! It gets all very confusing and extremely expensive for those people prepared to follow ‘aquatic fashion’.
On this page I hope to reverse that trend and encourage a resurgence in interest towards the things that REALLY matter….. the animals and plants! After all, if the only point of the hobby is to play with and observe protein skimmers and C02 devices, what is the point in keeping anything living!

I remember an aquarist telephoning me one day. He was so excited I thought this must be something good. “You must come and see my tank, Nick!” he exclaimed. “Why, what’s up?” I replied, expecting to hear about a breeding school of surgeonfish at the very least. “It’s a new pump!” “A new pump?” “Yes, a new pump. Come and watch it turn that water over, it’s awesome!” “But what about the fish?” I enquired. “Oh, I haven’t bothered much with them, I think one died recently, but this pump………….!” Yes, he wanted me to travel 150 miles to see a PUMP in action! Well, would you have gone? If the answer is yes, then you are obsessed with mechanical things and should join a self-help group. If you’d rather stay at home and watch your pets, then this is for you.

In fact, I urge all marine aquarists to forget their lighting, filtration and pumps for an hour each day and just sit down in a comfortable chair with a glass of good wine, some soothing background music, and simply watch the show! See how the animals interact. Learn their habits. Watch them feed. Find out about how a marine aquarium progresses. Enjoy the experience to the full. Have fun. That’s what its all about.

I’ll update this page regularly with articles about livestock. There may be some mention of hardware (for which I apologise) but I hope to keep it fully dedicated to fish, invertebrates and algae. 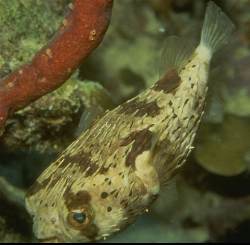 If you’re the sort of person who treats their fish like real pets, then look no further; for nearly all species of porcupinefish become extremely tame. At the first sight of their owner, they become almost embarrassingly active, swimming madly around the aquarium like a demented underwater puppy. Of course, most of this response is governed by its continual demand for food. But who cares, it’s an interesting and attractive animal, that’s very good company!

Widely distributed throughout the tropical, and sometimes temperate seas of the world, porcupinefishes consist of 15 species divided into 2 genera. They are generally much larger than their cousins, the pufferfish, with some specimens exceeding 36in(90cm) in length.

Porcupinefishes are unusual in the fact that their scales are modified into spines which may be held against the body or projected permanently, depending on the species. One thing is for certain, they are capable of putting up a formidable defence, especially when the fish rapidly draws in water and inflates itself, and are unlikely to be eaten even by the most determined predator. Owing to this fact, porcupinefish can swim around with impunity, fearing little but the largest carnivores. 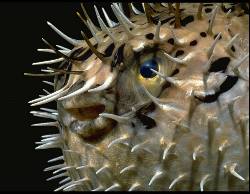 In common with pufferfish, diodontids have no pelvic fins, further limiting their manoeuvrability and increasing the need for a battery of defences. In addition, to spines and the ability to inflate, porcupinefishes have one final line of defence; a poisonous mucus that can be shed into the water at will. Enemies taking an unhealthy interest are soon deterred after tasting such a foul substance surrounding what appeared to be an easy meal! Unfortunately, this characteristic can be carried over to the confines of the aquarium where the results can be catastrophic! If poisonous mucus is shed into the aquarium, remove the porcupinefish to another vessel or vacant aquarium and perform a 100% water change; install fresh activated carbon. The toxin is very fast acting, so the aquarist must be swift to prevent total losses. It must be stressed that this is not a common occurrence and if all precautions are taken should not be a serious threat.

Porcupinefish posses powerful teeth as we have seen. The risk to the aquarist should not be underestimated, although a bite would usually occur by accident in the frenzy to take food from fingers. However, they are certainly capable of inflicting a nasty wound. To be on the safe side, plastic aquarium tongs should be used to hold food.

Diodontids possess single fused canine teeth in each jaw which are used to crack the hard shells of crustaceans and molluscs, their favourite foods. In the aquarium, molluscs are greedily accepted, especially if they still possess their shell. Opening the shell to extract the meat serves to wear down their constantly growing teeth. In addition, all meaty marine fare such as shrimp squid, lancefish, crab and lobster are readily taken. Although care must be taken not to overfeed.

The sexes are separate and remain that way throughout the individual’s lifetime (referred to as gonochorism) although there are no apparent external sexual differences. Unlike puffers, they shed their pelagic eggs into the water column to develop in the plankton layers. Reports of aquarium spawnings are somewhat rare and no larvae have been reared successfully to date.

Porcupinefish are not suitable for the invertebrate aquarium as can be very destructive to both sessile and mobile invertebrates. However, they make good community fishes, but only with fish of a similar size and a peaceful nature.

Two, or more, porcupinefish can be housed together but only in very spacious aquaria, usually open to the public! In the confines of a normal domestic aquarium, they will fight. Therefore, the rule of thumb is – one per tank. In addition, avoid introducing porcupinefish, pufferfish and boxfish into the same tank as there is likely to be disputes. 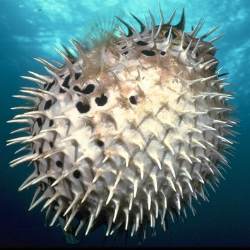 Porcupinefish can inflate with water or air. If, for example, the fish has to be netted, it usually inflates with air. Once full with air, they will float on the surface of the water with gills exposed. If left long enough, the specimen will eventually ‘suffocate’. If netted carefully and gently, this scenario should not happen; however, if it does, gently tip the tail up so that the face of the fish is underwater. Porcupinefish do not like being inflated and will deflate at the earliest opportunity; therefore, if its face is below water and there is no other conceived threat, it should deflate quite quickly and swim off.

Some people like to encourage these fish to inflate underwater and this is not a good idea as it puts undue stress upon the fish and could well be considered cruel. It also teaches it to become a frightened animal rather than a relaxed, tame one. If you want to see something puff up, go out and buy some balloons!

Diodontids are relatively disease-resistant. However, poor water quality often leads to eye infections whereby one or both eyes appear cloudy. If conditions are not improved, permanent blindness can result.

Species For The Aquarium

Some of the most commonly available species with max. wild sizes include:-

Spiny Boxfish (Chilomycterus schoepfi) 12in(30cm) is a very attractive fish that is less inclined to inflate than other species.

Bridled Burrfish (C. antennatus) 9in(22.5cm) rarely exceeds two thirds the maximum wild length in the aquarium and is the smallest of the porcupinefish. It is very peaceful and not difficult to keep.

Common Porcupinefish (Diodon hystrix) 36in(90cm) is, potentially the largest of the diodontids but rarely grows larger than 12in(30cm) in the aquarium.

Masked Burrfish (Diodon liturosus) 20in(50cm) could outgrow all but the largest aquarium. However, it can still achieve 12″(30cm) and may be beyond the scope of the average fishkeeper.

Water Changes: 15-25% every two weeks, if possible. Efficient filtration is essential owing to the amount of food consumed. A good protein skimmer and activated carbon must be seen as standard. Lighting: Porcupinefish will tolerate subdued, moderate, or bright lighting. Rockwork: unnecessary, as swimming space is more important.