An article discussing the proper stocking of a four foot, fish-only, marine aquarium.

There is no doubt that marine fishkeeping can be great fun, even when there appears to be nothing to do but wait. Let me explain. Imagine you have purchased your first marine aquarium, it is set up and running and the maturation fluid has been duly added. Now you imagine there’s 3-4 weeks of utter frustration because you’re completely idle until those ammonia and nitrite test readings drop to zero and you get the green light to go out and purchase your first fish. Wrong! It may just be some of the most enjoyable and educational days you spend. For in those four short weeks you may choose as many fish as you like without getting out of your armchair, spend money like water without reaching for your cheque book and make mistakes galore without the need to pay for them. I am, of course, referring to that period of time when you actually plan the living contents of that all too empty aquarium!

This is a crucially important period as it could decide the whole long term success of the tank. Stocking ratios need to be carefully considered, along with fish compatibility and personal preference.

To illustrate this, I have chosen a 48″ x 15″ x 18″ (h) tank of 40 imperial gallons nett Capacity (182 litres 48 US gallons), which I intend to stock with fish only. I have approached it as a relative newcomer to the hobby who has access to a few good reference books and a well-stocked, helpful dealer.

Although undergravels are by far the most common form of filtration, I have chosen an internally systemised aquarium instead. Whilst not being quite as expensive as one with full undertank trickle filters, it will do the job efficiently and be easy to maintain. In addition, it possesses all the necessary equipment for successful fishkeeping, including a protein skimmer and area for carbon. Three fluorescent tubes (front, back and middle) will be enough to illuminate the fish effectively and encourage some algal growth. 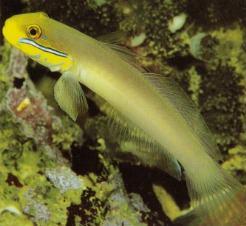 Being a fish-only tank with good filtration, I can stock at the rate of 1″ of fish to every 4 gallons during the first 6 months, increasing to 1″ to every 2 gallons in the following six months. This will give a total stocking capacity of 20″, it being a 40 imperial gallon (nett) aquarium.

As the biological filter needs time to adjust to any new introduction, I intend to stock very slowly indeed. Out of the final six fish I have chosen, one will be introduced every two months. I could stock at the rate of one each month but I feel I would rather be as safe as possible and reduce any likelihood of disease or stress as far as I can.

I have chosen a number of reasonably small fish which are very reliable and have a good track record. They differ quite markedly in shape, colour and behaviour, although none are aggressive. 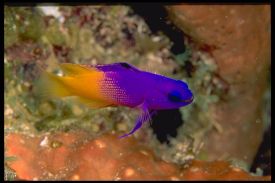 From this initial list I could see that my aquarium would eventually become overstocked and some of the species would have to be omitted. I firstly decided to take out the Bicolor Angel as I already had a broadly similar colour scheme in the Foxface. Second to go was the Banana Wrasse as it was also yellow and the Pyjama Wrasse would do much the same job, whilst providing a variable colour pattern and a greater outgoing temperament. One last fish to be excluded was the Scooter Blenny because I felt the Blue-Cheek Goby would be a better substrate-cleaner in this instance and also provide a more impressive show. 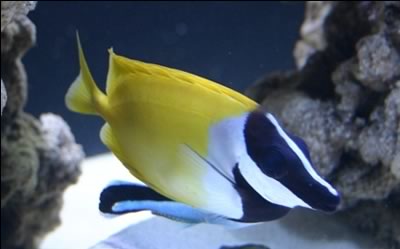 Briefly, the reasons why I chose the final six fish were as follows:

The maximum approximate total growth in this tank I estimated at 20.5″, which would be very acceptable. I intend to purchase all fish as juveniles at well under the sizes stated.

Having made my final decision, I shall introduce them in the following order:-

1) Pyjama Wrasse (bold, not stressed by being alone).
2) Scarlet Hawkfish (peaceful, will not bother new fish).
3) Blue-Cheek Goby (peaceful, not interested in new fish).
4) Foxface (sensitive, will take confidence from existing stock).
5) Pyjama Tang (can hold its own with present stock).
6) Royal Gramma (could be territorial if put in at the beginning).

The chosen stock can be easily fed on a variety of frozen marine fare as well as marine flake. The Foxface and Tang will appreciate a blanched lettuce leaf now and again. 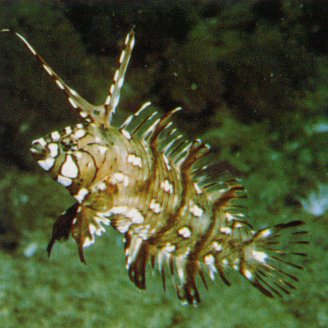 Q) What should I look for when buying fish?
A) Try to buy well-coloured, juvenile fish with no blemishes or disease of any kind. The eyes should be clear and the fish should be active. Witness it feeding; if it doesn’t feed, don’t buy it!

Q) What if the existing stock are aggressive to a newcomer?
A) If you choose your stock and order of introduction carefully, this should not be a problem. Of course, present fish will always show an interest in a ‘new kid on the block’ but this will soon pass as the new fish settles in.

Q) What if I see a fish I really want and it doesn’t fit into my scheme?
A) It is always possible to change your mind. But DO NOT BUY ON IMPULSE at any time! It can easily lead to disaster. Go home, check up on the character, ultimate size, ease of feeding and compatibility with other stock. If all proves satisfactory then substitute it for one or more fish on the plan. DO NOT ADD IT if it is unsuitable, do not try to convince yourself that it will be alright, show thought for the fish. Remember, ‘only fishkeepers have faults, fish have none’.