It’s A Woman’s Life In The Marines 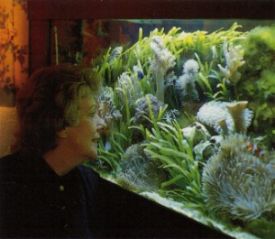 Pondering the mysteries of the universe one evening (you know how one does), a thought crossed my mind … WOMEN! (Now chaps, don’t get too excited!) Just why is it that so few women get involved with the marine side of the aquarium hobby? The question was a serious one and did not elicit a ready answer. I’m not talking about the wornan who helps her partner lug the odd bucket around at water change time but the 100% committed hobbyist. Think about it for a moment, see how many you know; not that many, if any, I would care to venture. A strange situation, indeed.
Is there a reason why more women should not get involved, or does the hobby hold so little attraction? Who better to ask than some of those few already firmly involved. A look at their fishkeeping history rnight also furnish some clues. So with that in mind I set off to interview four likely candidates in what turned out to be one of the most interesting assignments I’d undertaken in a long time,

Most marine aquarists are eminently practical people and Marion is no exception. Born and bred in Birmingham, England, she helped her father in the family electrical business as soon as she was old enough to grasp a screwdriver! Don’t get the idea that this is some butch belle of the briny, just an organised, caring person, brimming with common sense. All the right ingredients to be a successful aquarist.

Her first foray into fishkeeping is a not too unfamiliar one. Having expressed an interest in tropical fish, her husband’s surprise 1964 Christmas present was a three foot freshwater community tank. Even in those early days she greatly admired the exotic beauty of marine fish kept, albeit in a very basic way, by a local pet store.

However, she had to wait another 22 years before an extension to the house gave her the necessary incentive/excuse (not to mention space) to consider a marine aquarium as being a serious proposition at last.

Being a good planner, she read around the subject thoroughly and a subsequent visit to a local dealer gave her the necessary confidence to proceed.

Her first set-up was a 42″ x 18″ x 15″ (107cm x 45cm x 35cm) cabinet-style tank run on under-gravel filter plates and two powerheads. She also started with a protein skimmer which she now thinks is essential in any marine aquarium.

A 24″ x 15″ x 12″ (60cm x 35cm x 30cm) quarantine tank was set up at the same time and has since proved invaluable, mainly for isolating aggressive specimens, as fortunately, Marion’s fish have never had any disease problems.

She has never considered regular maintenance to be a chore but more an opportunity to improve conditions, thus safeguarding the well-being of her livestock. 20% water changes were undertaken fortnightly as well as the addition of pH buffering solutions and trace elements.

A year ago Marion progressed onto a 51″ x 20″ x 20″ (129.5cm x 51cm x 51cm) H39 Minifleef system as she felt that her greater experience and success with fish would justify a move into the more complicated world of coral invertebrates. Her confidence was rewarded by a healthy display of corals, fish and crustaceans, as well as a strong growths of macro-algae.

She keeps an aquarium diary in which all purchases are logged together with a record of successes and failures (not many of those!), as well as test results and events of interest.

Marion found the keeping of marines to be a challenge but she is not easily discouraged and found success to be more attainable than she had first imagined.

Female friends have admired her aquaria and even enquired about the possiblity of taking up the hobby but most thought it too complicated and too time consuming.

As an avid reader Marion feels that she is in touch with the hobby and likes to keep up with modern advances. She’s a busy person with other interests but still finds time to enjoy marine fishkeeping and tells me she would have no hesitation in recommending it to other women prepared to “accept a challenge”.

Admittedly Debra has a headstart on most women aquarists (and most men for that matter!), as her father used to own an aquatic shop, which is now hers! Nevertheless, the interest she has maintained over the last nine years, five of which have been in marines, has been very much of her own volition.

Not a person to do things by halves, her first marine tank measured 66” x 18″ x 42″ (168cm x 45cm x 107cm) high!! Unfortunately that had to go, for a very good reason – she couldn’t reach the bottom of the tank without a snorkel and mask! Although she did successfully keep a Snowflake Eel, Spiny Boxfish, Lipstick Tang and several other large fish.

Moving onto a more conveniently sized aquarium, Debra transferred the existing stock into an even larger 83” x 30″ x 24″ (211cm x 76cm x 60cm) set-up whilst also starting a 53” (135cm) invertebrate system as well! Her present set-up is a 79″ x 20″ x 20″ MiniReef H39 mixed fish and invertebrate system. It’s an impressive sight, packed with large soft corals, anemones, gorgonians, mushrooms and an incredible range of macro algae, mainly caulerpa species; at one time she had no less than 21 different species but it’s now nearer 8 in order to make room for the flourishing invertebrates!

No hard corals are kept, as she finds they do not last long in this particular tank and remains with species that she already knows do well.

Her ‘boys’, refering to the fish, include a Royal Gramma (five years with her and still going strong) a pair of Common Clowns, a Firefish, various Blennies and Gobies. They are fed four times a week only but all are in the peak of health without a hint of disease (a great example of correct feeding)

By her own admission, she is not overly keen on maintenance. Debra reckons that the rewards of looking at a well presented aquarium after a hard days work is well worth the effort. She comments that, “marine fishkeeping need not be time-consuming and in that respect I’m pleased with the MiniReef system.

I don’t keep anything that I know has little chance of long term survival but I’m not afraid to try something new, within reason.

When I asked her views about more women getting involved in marines she thought it was, “an ideal hobby, well within the scope of most women.” 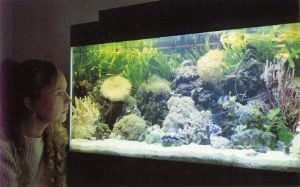 Although only in her early twenties, Fiona already has many years fishkeeping experience. Her first freshwater tropical community tank was a present when she was just eight and the small seed of interest was sown, blossoming over the years to become a committed hobbyist. Her last freshwater aquarium was 8 feet long (240cm) and housed many large catfish, (you don t get much more committed than that!). A move of house forced the sale of her prized catfish but enabled her to consider a change of aquatic direction.

A friend had a 4 foot (120cm) marine aquarium for sale and Fiona duly purchased it, without stock. This gave her time to read quite widely around the subject. 18 successful months gave her the incentive to go for a more ambitious project and the existing set-up was replaced by a 51″ x 21″ x 16 (129cm x 53cm x 41cm) aquarium. In common with Marion and Debra she settled for a mixed fish/invertebrate system.

Even though a busy career woman, every spare moment is spent studying the fascinating life forms within her tank and time is always made for essential regular maintenance. She is absorbed totally by this new found area of the hobby and not afraid to mention it to her girl friends. “Some of them would love to take it up but none have, so far,” says Fiona. “I think many of them would like to take up the hobby but are afraid of the ‘interference factor’ in the form of their partners. They know that they would never be left alone to get on with things on their own.”

Fiona feels that fishkeeping is essentially to do with personal achievement and although everyone can share in the final product, the creation and maintenance must be left to the individual.

Through these case studies several things seemed to have become apparent; all three women shared the same attributes: conscientiousness, a will to succeed, a caring personality and a willingness to learn and ask questions. They also carefully chose the most appropriate set-up to suit their own situation, time and money.

My own opinion is that the qualities to become a good marine aquarist are largely represented above and remain the same whether male or female. However, men seem more willing to give new ideas a try, although they do suffer the unnecessary consequences of impulse buying that women tend to avoid.

Married or single, each one of our case studies expressed a desire to be left alone to get on with things without constant interference, thus increasing the sense of personal achievement. Im inclined to agree and maybe here we are moving closer to the heart of the matter. Do men give women the opportunity to create their own successes and failures in an area of fishkeeping traditionally regarded as the difficult end of the hobby?

It is also possible that the more technical nature of marines has drawn out a similar set of attitudes normally found in the eternal male/female/automobile triangle? It’s an interesting proposition!

When all is said and done, the great thing about fishkeeping is that, young or old, male or female, disabled or able-bodied, as long as the interest is there the hobby has something to offer everyone.

Since conducting these interviews, it is sad to report that both Marion and Fiona have abandoned the hobby, albeit owing to personal circumstances and not disinterest. Debra is still running a success aquatic store but finds it too time-consuming to keep an aquarium for personal enjoyment (these days, you are more likely to see her running in the London marathon!).

Having said that, about 5% of the email to my web site are from women, so there is still a small, but enthusiastic minority out there. My only concern is whether it will ever increase?