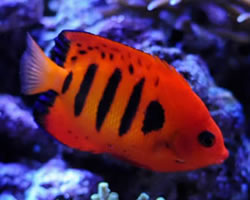 Saltwater fish really have to compete with each other for attention. When just about everything in the tank has bright colors, bizarre tentacles, elaborate fins, or dangerous spines, simply being beautiful isn’t going to cut it.
One fish that doesn’t have to try very hard is the flame angelfish. These vibrant fish have an almost unnaturally intense coloration that’s reminiscent of the rising sun. Their intense red is contrasted by an neon blue along their back fin. It looks as though flame leapt off the head of a match, grew a set of gills, and then started swimming through your fish tank.

It’s easy to see why flame angelfish are a popular choice in the world of saltwater aquariums, but are flame angelfish right for you? This quick fish profile will tell you everything you need to know before purchasing one of the most beautiful fish that the ocean has to offer.

Luckily, flame angelfish are relatively easy to care for. They’re a fairly hardy species and will spend much of their time chowing down on algae that grows along live rock. That is one requirement that you’ll have to be careful not to overlook – flame angelfish need a lot of rock in their habitat in order to feel comfortable. Give it plenty of holes and archways to hide in. After all, if you stuck out that much in a world filled with predators, wouldn’t you feel a little bit skittish, too?

Flame angelfish mostly eat plankton in their juvenile stage, but once they reach adulthood they might decide to start munching on clams and corals. Add flame angelfish to coral aquariums only under extreme caution. If you’re determined to force the two to get along, you might want to try picking up a very young flame angelfish and getting it accustomed to a regular diet. If all goes well, it should decide that its store-bought, meaty diet is sufficient without needing to supplement its meals by eating your beloved coral. Flame angelfish enjoy flake food, frozen shrimp, algae, and Spirulina.

The catch with flame angelfish is that you’ll only be able to keep one in a tank. They’re a generally amiable species, but they are extremely territorial when they’re exposed to other angelfish. They might even go so far as to attack other angelfish that resemble their species, or that have similar eating patterns. You wouldn’t want to try to breed them anyway – flame angelfish are notoriously difficult to breed in captivity.

If you can take care of all of these requirements, then a flame angelfish should be an excellent addition to your saltwater aquarium. These small, vibrant fish will add some spirited energy and beautiful flashes of color to your tank. Your flame angelfish might catch your eye initially thanks to its coloration, but you’ll quickly fall in love with this lively and curious species.