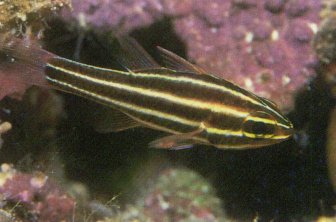 Whilst the coloration and behaviour of this family of fishes could never be regarded as wildly over-the-top in the same as, say, clownfish, they nevertheless have a subdued charm that appeals to the marine fishkeeper. In addition, these are some of the easiest fish to maintain and the newcomer would do well to put the mane of cardinalfish down for consideration if a community of smallish fish is to be the objective.

Cardinalfish belong to a reasonably large family, featuring approximately 200 species. Practically all of these make good aquarium subjects but only a few of the more colourful and numerous species are imported; The Pyjama Cardinal (Sphaeramia nematopterus) and the Flame Cardinal (Apogon maculatus) being the two most commonly available until recently.

A New Fish On The Block

A newly discovered species has become very popular with hobbyists and is commonly known as the Emperor or Banggai Cardinal (Pterapogon kauderni). This fish was introduced to the hobby by Dr Gerald Allen in 1996. Since then it has been widely available in aquatic shops throughout the United Kingdom and North America. It is not a reef fish as such, because it is found in shallow, sand-bottom grass beds where it lives among the spines of long-spined sea urchins (Diadema spp.). Its coloration provides ideal camouflage for this environment. 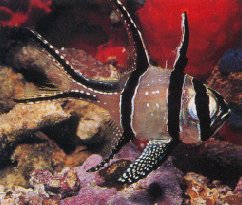 The Banggai Cardinal is so named because it is found only in the seas around the mountainous Banggai Islands off Sulawesi in Indionisia. So far, no other locations have yet been discovered.

Even though it has only been known to the hobby for a few short years it is already being known as the ‘guppy’ of the marine aquarium owing to its readiness to breed in the aquarium environment. Large numbers have been bred commercially and have reduced the initial high price down to a more reasonable level. In addition, many marinists are also finding that pairs breed freely given the right aquarium conditions.

All cardinalfish are thought to be mouthbrooders with the male taking responsibility in incubating the eggs. For those unfamiliar with this breeding practice, the eggs are laid upon a flat surface, where they are fertilised by the male. He then takes the eggs into his mouth where they remain safe from predation. After hatching, the fry are not released immediately, but remain within the mouth until they are such a size to fend for themselves. This may mean that the fry use the mouth as a temporary home, frequently leaving for brief periods to feed on plankton. Many males desist from eating altogether during the rearing period. 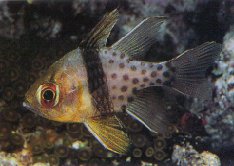 Cardinalfish are easily identified as they have two separate dorsal fins held proud of the body at all times. Being generally nocturnal by nature, it is not unusual to find that most species posses a pair of quite large eyes to assist in the capture of planktonic prey during the hours of darkness. Having said that, most cardinals adapt very well to the relative brightness of the home aquarium and can be seen on show most of the time, albeit in a darkened corner or beneath the shade of an overhanging rock or coral.

Cardinalfish are shoaling fish and may be found in the wild in quite large numbers. It is therefore best to keep more than one in the marine aquarium. If the tank is particularly cramped there maybe some bickering for space but this is usually minor if the fish have all been introduced at the same time.

As we have seen, cardinals in the wild are plankton feeders but there mouths are large enough to accommodate quite big prey. In the aquarium, they should be offered a good variety of foods including brineshrimp, lobster eggs plankton, small pieces of mussel, squid and cockle. Even flake food will be accepted by many specimens. 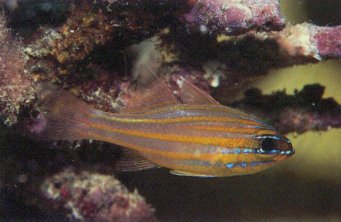 Cardinals are generally very peaceful fish and prone to bullying by more aggressive species. Therefore, larger and pugnacious tankmates should be avoided wherever possible.

It is with great pleasure that I can assure readers that cardinalfish make an excellent choice for both the beginner and experienced hobbyist alike. They are straightforward to maintain and feed in reef tanks and suitable fish-only communities. I can recommend them unreservedly.

Water changes should be performed at a rate of 15-20% every fortnight. Protein skimming and activated carbon filtration should be regarded as standard.

Cardinalfish could almost be regarded as the ‘perfect’ marine aquarium species. Given the correct conditions, they will give many years of pleasure to the keen fishkeeper.