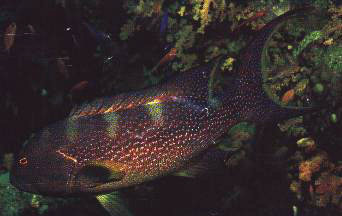 With the opening of marine collection in the Red Sea, many organisms have become readily available which were previously too expensive for the average aquarist. It was just a few years back that a purple tang (Zebrasoma xanthurus), golden butterfly (Chaetodon semilarvatus), asfur angel (Arusetta asfur), or blue moon angelfish (Pomacanthus maculosas) would cost a few hundred dollars each. Such is no longer the case. I saw purple tangs from the Red Sea sold for about the same price as yellow tangs from Hawaii. This is a result of an increase in the number of Red Sea collecting stations and the development of adequate transport from them to livestock wholesalers. This situation is a real boon for aquarists, providing increased availability of many hardy and beautiful fish.

Many fish that have poor survival rates in captivity, such as the regal angel (Pygoplites diacanthus) and the powder-blue tang (Acanthurus leucosternon), do remarkably better when the specimens are collected from the Red Sea.

Such is the case with the Lyretail Grouper, Variola louti. This beauty is found from the western Indo-Pacific to the Indian Ocean; but the healthiest and most colourful specimens come from the Red Sea.

There are from three to fifteen subfamilies of serranids, depending on the taxonomic system employed, comprised of 64 genera and 449 species. Some notable members are true basses and groupers, hamlets, fancy basses, coneys, tukas. marine bettas and soapfish. Most are marine and are found world wide in tropical to temperate seas, from he shallows to more than a thousand feet deep.

I have never seen a poor lyretail grouper specimen offered for sale; all have been in excellent condition. The lyretail is outgoing, quickly adapting to new surroundings and spending a good part of its time in full view in an aquarium.

The coloration changes dramatically from juvenile in adult. At 100 to 150 millimetres (4 to 6 inches) the fish have a broad black horizontal mid-body band, red to yellowish above and whitish underneath. Mid size fish are an intense purple with bright blue spots overall. Adults become salmon coloured with enlarged, lighter blue spots. 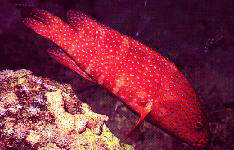 Be aware that the more common Miniata Grouper, Cephalopholis miniata, is sometimes offered as the lyretail. This is a gorgeous desirable species in its own right with similar colour markings. The two can be easily distinguished by the shape of the tail fin. The lyretail’s is, of course, strongly lunate, but that of the miniata is square or slightly rounded.

Every individual Variola I’ve seen in the trade has been been between 100 and 200 millimetres (4 and 8 inches) in length. Smaller fish are the most desirable for an aquarium. These fish and all other basses should be transferred from tank to tank as little as possible. They become less tolerant of change as they grow.

Lyretails spend most of their time in crevices of the reef. Provide plenty of caves and other dark spots for cover.

Most basses are very tolerant of relatively poor water quality. Filtration should be adequate to handle the large tanks and occasional large wastes usually associated with basses. Any stable temperature in the range for tropical fish is acceptable. Although many aquarists maintain their systems at an artificially low specific gravity (1.018 – 1.023) to increase carrying capacity, lower parasite loads, and to save on salt mix, this is not a good idea with livestock from the Red Sea and even the Indian Ocean. Because the evaporation rate in the upper gulf can reach 1,600 inches a year, the normal salinity of water in the Red Sea is high. A constant specific gravity of 1.025 – 1.027 in an aquarium is better for Red Sea fish. You will be rewarded with much more colourful, vigorous, and long-lived specimens.

It is best to keep only one lyretail to a tank unless the system is very large (hundreds of gallons) and well-appointed with rock and coral. The lyretail will probably become the dominant fish in the aquarium. As with most species of bass, it is not particularly aggressive, but it is carnivorous and will swallow any fish small enough to fit into its mouth.

Like other large bass and groupers, the lyretail soon learns to recognize food and to associate you with it. It will accept live freshwater organisms as well as formulated, preserved, or frozen foods. Unless you want to have your fish outgrow and pollute its aquarium quickly, feed sparingly and infrequently, two or three times a week. Unlike some of its smaller brethren, the lyretail is relatively hardy and disease resistant.

The lyretail grouper is one of the most attractive fish to come from the Red Sea. We can all look forward to more inexpensive quality livestock from the Red Sea as a consequence of improved international relations in the area, and the forethought and entrepreneurial spirit of new collectors there.