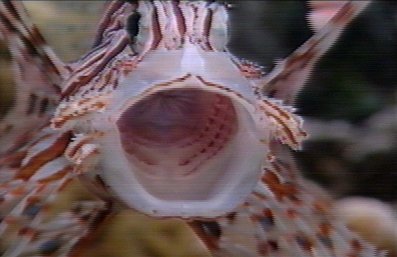 The Volitans Lionfish is to me one of the most fascinating of marine fishes. They have an almost royal presence about them in almost any aquarium. If you like fish that swim all over the tank then this is not the fish for you, as they tend to be at home for hours in one spot without moving much at all (Usually they can be found perched on top of a plant or near the skimmer/water intake for your tanks filtration system).

The healthy lion should not be resting on the gravel in your aquarium for long periods of time , this is an indication that something is wrong. (Although, it is healthy for them to sleep laying on the gravel occasionally, but if they do it often then you have probably not provided a very good place for him to perch!) The other reason for a lion to lay on the bottom is if he is ill. Lionfish are tricky to medicate, some medications are not safe for them. (For example: Copper based medications, such as those often used to treat Ich).

The lionfish is a very passive/aggressive fish in that he will usually not attack another fish unless:

A few of the fish that I have found to be non-compatible are:

This is not to say that they are not compatible under all circumstances, but you have to be very careful at feeding time, as most triggers eat the same food as the lion. One recent experience that I had, involving this problem was at feeding time. I dropped a silverside into the tank and my Bursa Trigger went for it before I could stop the lion from approaching… (Using the net of course, the lion can move extremely fast when he wants to be!) Needless to say the lion was not about to share his food and to my horror (Both fish are very near and dear to me, not to even mention that they are also easily worth $100.00 each!) the lion proceeded to sting the trigger on the side. The story does have a happy ending though, as the lion gave his friend of over four years a "dry strike" (He injected no venom.) 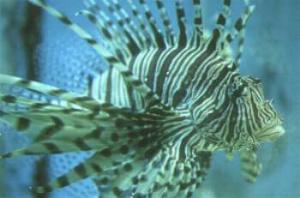 The lionfish eats Silversides, a type of marine fish a little larger than a freshwater guppy available frozen at most fish stores (Or if you are really lucky, available live!) I have been told, and it is many peoples opinion, that feeding them goldfish is perfectly healthy, however I have to disagree with that as I have had my lions get ill for no apparent reason while feeding them goldfish. Switching to silversides only has corrected that problem entirely. Watching the lion eat is an exciting event that never fails to amaze me. The lion uses a vacuum effect utilizing a powerful flap in his gills to suck water through (And his prey into his mouth!) and at the same time uses his long fins on the side to propel himself toward his prey. (This entire process takes about half a second, so watch closely!)

All in all, the lionfish is my favourite fish of all time, and I can't imagine not having one. They are a joy to own and also a great conversation piece. I will be happy to help out if anyone has any questions at all concerning the care, feeding or medication of the lionfish (Or any other species of scorpionfish).