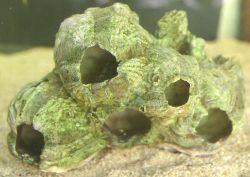 One of the greatest pleasures of marine fishkeeping has always been to replicate as accurately as possible the authentic environment of a particular range of livestock, thus enjoying perfectly natural behaviour. Depriving fish and invertebrates of a similar environment from which they were collected can create stress, leading to strange behaviour patterns, disease, and in extreme cases death!

On the reef nearly all fish and invertebrates make use of cover that rockwork can provide at sometime or another. Many fish will only retreat into crevices at night or when danger is imminent; others spend the greater part of their lives traversing the myriad of passageways found within the coral walls never to remain in one place but always avoiding open water where they might fall easy prey to hungry predators. Still more species find a suitable cave, or crevice, and remain in the same location for long periods; an excellent example of this being Moray Eels. One, or even two specimens can be witnessed sharing the same cave, heads protruding, only to leave its safe confines on the briefest of feeding forays.

The vast majority of mobile invertebrates, on the other hand, spend practically all the hours of daylights hidden from sight within the safety of a favoured cave or crevice. To do otherwise would be to attract the attentions of the numerous predators cruising the open waters of the reef looking for an easy meal. Some of the more familiar examples may include various species of lobster, crab, shrimp, octopus, nudibranchs, cowries, starfish, sea stars, brittle stars and sea urchins. Many of these invertebrates will only leave the safety of their crevices during the hours of darkness in order to forage for food, returning to the very same spot at the end of the night.

Even though aquarium livestock may have been chosen with the utmost care and regard for compatibility, supplying a suitable cave or crevice in which to retreat might still be essential in order to provide a sense of security, even though all possible danger has been eliminated.

Whether the aquarium be fish-only, invertebrate or mixed fish/invertebrate, it is important that rockwork is chosen and arranged with suitability and safety in mind. Just piling rock upon rock could prove hazardous, not only for the livestock but also for the fishkeeper, should a serious rockfall occur and shatter the tank glass! 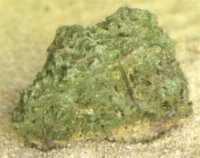 Tufa Rock is the most popular and widely available material. It is easily worked with tools and using a little imagination can be created into a realistic rock face. Unfortunately, tufa rock has a rather crumbly texture and even after the most thorough rinsing under a running tap, will never provide an entirely suitable surface that can be used with silicone sealant in order to attach one rock to an adjacent one for an increase in strength. To make the best use of tufa without the need for bonding agents, always make sure that large pieces are placed on the bottom of the aquarium with their bases flattened for extra stability. Flattening the base can be easily achieved by carefully chipping away with chisel or old screwdriver. Care must be taken not to be to over-enthusiastic or remove too much material at any one time as tufa has a tendency to shatter into a mass of smaller pieces, (ideal for bonsai gardens but not aquaria!). From this firm base, build the wall up at a 45° angle with progressively smaller rocks and the caves and crevices will create themselves to a greater extent. Do remember that the dimensions of planned livestock should be considered at this point; a small wrasse might be happy with a mass of tiny crevices, but this will be of little use to a large angel or lobster. Therefore, try and arrange entrances and exits that will suit all tankmates; urchins or lobsters that have to force an opening in rockwork can cause hazardous rockfalls.

Some fish e.g. Moray Eels and many invertebrates appreciate the cover that lengths of plastic tubing can provide. By introducing some of these in a range of diameters at various points during construction, the plastic material can be successfully masked, and tightly wedged so that removal or dislodgement becomes impossible. NB. Most plastic plumbing pipe releases toxins into saltwater and the safer food-grade piping should always be sought out. Even so, it will need to be soaked in a saturated salt solution (cheap dishwasher will suffice) for 24-48 hours before use. 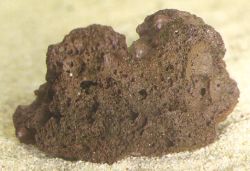 Lava Rock is another material that is readily available, albeit more expensive than tufa. It holds several advantages over its calcareous counterpart; being of a very rough texture it is easily locked together to form a stable structure and smaller caves and crevices are often built into the rock itself. Being very porous, some pieces might be inclined to float but a vigorous shake under water will release the trapped air bubbles and the rock will sink.

Both Ocean Rock, Limestone and Living Rock can be arranged to create suitable nooks and crannies but being often rather smooth has to be constructed in much the same way as tufa rock.

Barnacle Clusters are excellent retreats for small blennies and gobies. Several of these can be inserted into the main rock structure where the situation demands. A word of warning though, barnacle shells make an efficient trap for detritus and must be cleaned internally every few months. If fish or invertebrates are kept that are too big to take full advantage of these clusters, then they are best omitted from the display.

I have often seen what I term as 'Samson's Arch' within an aquarium. This usually takes the form of a very large arch constructed of very small pieces of rock glued together. Such structures are inherently unstable and more often than not collapse within a very short space of time. They form no useful purpose other than to please the aesthetic(?) eye of the fishkeeper. Avoid where possible!

Slate is a useful construction medium. It is strong and in large slabs, can support respectable structures. It can, however, appear a little unnatural in the marine aquarium.

The imaginative marinist can use old mollusc shells, terracota flower pots, ceramic jugs, strong bottles with wide necks, suitable aquarium decorations, to name a few. Obviously, 'alternative' caves must be safe in saltwater and many will appear to be far from authentic as far as the undersea world is concerned!

Most aquarists think firstly of silicone sealant to glue rocks together and In theory this a good idea, in practice the sealant rarely makes a good bond. At best it will do no harm, at worst it might lead the hobbyist to believe a structure is safe, when it is not. A better adhesive is underwater epoxy resin. Construction can also be reinforced by the use of a strong fishing line.