Water Circulation In The Marine Aquarium

Q) How much importance should be given to water circulation in the marine aquarium?

A) The 'big' topics such as filtration, lighting, feeding and stocking nearly always overshadow water circulation to such an extent that it is almost dismissed as unimportant. This a pity because good water movement within any aquarium is vital to the health and well-being of just about any livestock you care to name.

Whilst the aquarist may never have had the good fortune to visit any of the world's reefs, television documentaries on the subject are common and often graphically illustrate the forceful, exceptionally strong and often violent water movement encountered in the wild state. Many fish and invertebrates are admirably suited to such conditions and the aquarist should not shy away from going some way to replicating the same. Indeed, it would be true to say that most tanks are so lacking in water movement that livestock often appears lifeless and unnatural in appearance! 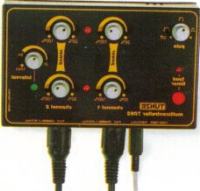 There are two main types of water movement to be encountered in the wild – these are surge and turbulence. Both are easily duplicated within the aquarium.

Surge is the movement of water backwards and forwards across the reef as caused by wave action. Underwater, sea fans can be seen to be pushed one way and then the other by surge.

Turbulence is an altogether more complicated and random movement of water in all directions, often responsible for localised eddies and isolated disturbances of an unpredictable nature. Many soft corals gyrate in all directions under the influence of turbulence.

Even strong pumps take a great deal of effort to move aquarium water around effectively. Resistance from the liquid itself, rocks, decorations and other surfaces all serve to impede the flow considerably and allowances must be made to provide more pumps than were probably thought necessary. This is especially true of reverse-flow systems where water movement is barely detectable without extra pumps.

Whilst airstones can achieve limited circulation by bringing the 'stale' bottom layers of water to the surface, it is impossible for them to duplicate anything like the surge or turbulence required, only specialist pumps or powerheads can do this. As a guideline, the number of circulatory pumps can be considered as follows: two for a 3ft tank, three for a 4ft tank, four for a 5ft tank, five for a 6ft tank, and so on. Larger pumps with a flow control are preferable as the volume can always be reduced on a larger pump, whereas it cannot be increased on a smaller one.

Some experimentation with locations will be necessary to achieve best results. Pointing the outlets towards each other is one sure way of getting good random turbulence patterns and a variety of currents. Controlling the circulatory pumps (never the filtration pumps) by means of an electronic random surge device can replicate both turbulence and surge at will.

Effective surge and turbulence within the confines of an aquarium can produce a host of advantages:

© Nick Dakin. May not be reproduced in part, or whole, without permission.
FAQs
763