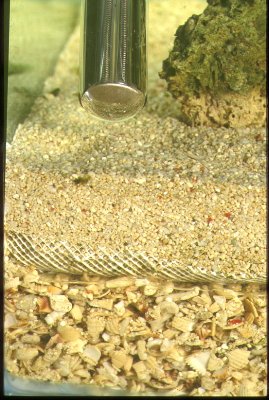 Q) How do I go about setting up a basic undergravel filter for a marine aquarium?

A) Over the last ten years or so, marine filtration has advanced in leaps and bounds, leading many to believe that there is no future for the technique that sustained marine livestock for several generations…….the undergravel filter. Such beliefs are, of course, highly misleading, for undergravel filters work very well and are an excellent starting point for newcomers to the hobby; especially those whose budget will not stretch to all the high-tech gadgetry now available. Having said that, we cannot ignore the basics of good marine aquarium husbandry and any beginner is urged to start with a reasonably sized aquarium; 36"x12"x15" (90x30x35cm) must be seen as an absolute minimum, although 36"x15"x18" (90x35x45cm) would be a much better starting point. The larger the tank, the greater the degree of water stability and the happier the livestock (and you) will ultimately be.

Undergravel filters fall into two basic arrangements – the 'downflow' filter and the 'reverse-flow' filter. Whilst the reverse-flow method holds definite advantages over the downflow filter, it is possible to convert from one to the other with a little extra equipment and a few adapters. Both types of undergravels are constructed in much the same way: we start off by laying down a single undergravel filter plate, or series of smaller clip-together plates over the whole base area of a clean aquarium. This provides a platform under which there is a permanently clear space. Water is drawn from this space by means of one, or more uplifts, usually sited at back corner of the aquarium. By placing an airstone down the uplift, an inch or so from the bottom, water is drawn up the tube and back into the aquarium. Alternatively, a water pump, commonly known as a powerhead, is positioned on top of the uplift and this pulls the water from the space created by filter plate(s). If more than one uplift is used, they must be balanced by using the same model powerhead, or airpump output on each. At this point, the aquarist would do well to heed one tip: if it is envisaged that the conversion to reverse-flow is to be made at any time in the future, the installation of a single, finely slitted filter plate would be far preferable than the open mesh of the clip-together varieties. The logic of this advice will become clear as we proceed.

It is often recommended that the filter plate(s) should be sealed into place by means of silicone glue in an effort to ensure that water is drawn in from the top of the plates exclusively and none 'leaks' in from the sides. In practice, this is totally unnecessary as the weight of the filter media effectively seals the plate(s) in position.

Filter media consists of an initial layer of coral gravel, dolomite chips or crushed shell. Such coarse media is essential, for two reasons. Firstly, it provides a good 'draw' of water through the finer media above; and secondly, it will not clog or pass through the slits in the filter plate(s). This initial layer is levelled out at a rate of 10lb (4kg) per square foot of base area. A fine mesh plastic screen called a gravel tidy is then carefully positioned above the coarse media. It is important that the gravel tidy fits snugly to all edges of the aquarium and is carefully cut to accommodate the uplift(s). By introducing such a screen we effectively prevent the next, and final, layer of coral sand from entering the coarse material below and clogging up the whole bed. For optimum efficiency, coral sand is introduced in the same quantity as the coarse media (10lb:4kg per square foot) and although some authorities suggest a slope from back to front to enable detritus to collect at the front for easy removal, the truth is that any graduation is soon wiped out as the bed naturally levels itself flat!

It is now clear why this particular method of filtration was labelled the 'downflow method', for as the water is removed from the space below the filter plate(s), it is replaced by water being drawn down through the filter bed in an endless cycle.

The total depth of the filter bed will now be about 4-5" (10-12.5cm) which not only consumes a great deal of space but also takes up a considerable amount of volume that could otherwise be utilised by extra valuable water. Such disadvantages were some of the important reasons why undertank trickle filters were developed. By providing a deeper than normal tank, say 18"-21" (45-52.5cm), these obstacles take on a lesser importance.

Some fish enjoy digging in the coral sand and will soon 'short-circuit' the even flow of water by their activities as they constantly expose the gravel tidy. To avoid such unnecessary disturbance, position another gravel tidy above the required amount of coral sand and top-off with another inch or so of extra sand in which they can perform any amount of excavations to their heart's content!

Some undergravels are made up of single media beds, omitting the gravel tidy and consisting of either coarse media exclusively or a mixture of coarse and fine. These are most evident in some retailers tanks and can sometimes support quite a high level of stock. Do remember though that fresh water is constantly being replaced as stock is sold and the tank is probably under permanent prophylactic medication against disease. All things considered, it is best not to emulate this type of set up.

Although media may appear clean when packaged up for sale, it is important to rinse it in a bucket under a running tap until all the contaminants and cloudiness have disappeared. In addition, with the media spread thinly over a newspaper, an algae magnet wrapped in a plastic bag, can be run over the surface to remove any tiny pieces of metal. These accumulate in the sand and gravel as shipwrecks disintegrate close to where the media is collected. The plastic bag will prevent any metal slivers from spoiling the algae magnet as the bag is easily removed along with the metal.

Use the plastic Long-Life air diffusers for air-operated uplifts. They last up to six months, whereas ordinary airstones will clog with salt in a matter of a few weeks. Do not use limewood air diffusers as they will cause foaming to occur on the surface Of the water.

© Nick Dakin. May not be used, in whole or part, without permission.