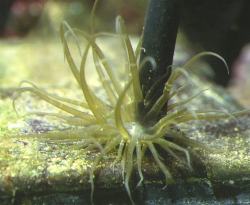 We all know how difficult most anemones are to maintain, so what a relief to find a species not only easy to keep but quick to multiply…..WRONG! Aiptasia anemones are the proverbial wolves in sheep's clothing. They have a prodigious sting capable of killing (as a prelude to eating) small fish and even larger fish can sustain a nasty injury if contact is made. Reef tanks suffer particularly badly, for as the anemones spread amongst the polyps, corals, clams and other anemones they tend to sting everything they touch.
As a result, if their neighbours are not killed, they will show the scorch marks from having brushed against these undesirables. Indeed, I have witnessed a small public aquarium where the only things on show were several large non-descript damsels and literally thousands of Aiptasia anemones (apparently, the poorly trained staff were unaware that they had a problem!!). Needless to say, no other invertebrates or small fish could be displayed for long. It is interesting to note that from one individual anemone, dozens of offspring can appear within a few short weeks owing to an extremely rapid reproductive ability. Several months after that, a whole aquarium may be covered in a mass of little killers if nothing is done to bring matters under control, as we have already seen. Triffid Anemones normally have an elongated body stem which is lodged far down in a rock crevice or amongst a polyp colony, making it virtually impossible to remove without resorting to some quite drastic actions. At the slightest disturbance it will disappear like a flash into the safety of its inaccessible home. To make matters worse, if the whole animal is not destroyed, it can quickly regenerate itself from a small piece of remaining tissue.
The Solution

The fish-only aquarist luckily find themselves in a relatively fortunate position as even these resistant anemones are no match for a treatment of copper-based medication. Other alternatives are to introduce fish species that look upon these anemones as tasty snacks; for example, larger angelfish and most butterflyfish. The easiest option is to remove the offending pieces of rock in which colonies are established and scrub them under a hot water tap!

The reef hobbyist is not quite so lucky, as none of the above options are open, realistically speaking. Many alternatives have been tried, all with varying degrees of success, and it would be wise to attempt the less drastic first.

The biological solution is to introduce an anemone-consuming fish or invertebrate. Unfortunately, these tend to be too indiscriminate with other livestock and will happily nibble the very corals you are trying to save!

The second, and perhaps the most effective option is to use a syringe and inject the offending anemone with a lethal dose of calcium additive. This has the added advantage of being safe should any of the solution escape into the surrounding water. In fact, almost any additive could be used if the first proves ineffective.

Other methods have been suggested, such as lodging a copper wire in the body of the anemone until it has demised through copper poisoning (unfortunately, this might prove very risky as all invertebrates are sensitive to copper toxicity).

The third alternative is to fill a syringe with very hot water and squirt it at the base of the anemone. I'm assured that it does work, although it didn't when I tried it! It could also prove harmful to invertebrates in the immediate vicinity.

Two strategies guaranteed to make most of us wince, but proven effective nonetheless, involve the use of a sharpened screwdriver! The first method requires that the instrument is pushed into the anemone's hiding hole and the animal ground to pulp! The second is similar but the screwdriver is heated to red-hot and the same procedure carried out! It is recommended that both are carried out in a separate bucket or just above the surface of the tank water. Take the utmost care if either of these procedures are attempted.

When all is said and done, it is best to purchase only those rocks that are Aiptasia-free in the first place, from tanks noticeable by their absence!