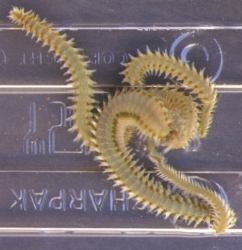 Anyone whose hand has ever come into contact with a bristleworm will tell you that they leave fine, barbed hairs embedded in the skin, causing a rash and an irritation somewhat like a nettle. Whilst this may prove a relatively minor inconvenience to the aquarist, bristleworms are not only scavengers but predators which can damage valuable livestock. Particularly prone are those fish that 'lock' themselves into a safe crevice at night e.g. Firefish, as well as a variety of invertebrates such as clams.

There are a number of species of bristleworm to be found in the average aquarium. They range in size from around an inch (2.5cm) up to a reported 24 inches (60 cm)! My personal record is one found coiled snake-like beneath a rock at 18 inches (45cm) and the thickness of my little finger!

Bristleworms are nocturnal in their habits and can be seen a few hours after total darkness crawling over a favoured piece of rockwork. Often, they can be picked off by using a pair of plastic aquarium tongs; but this a laborious process as only a few will be caught before the rest beat a hasty retreat into safety and inaccessibility. Far better to set a trap. Commercial traps are now available and work very well. They utilise an inverted cone-shaped grid at either end of a tube, in the centre compartment of which is a bait container. As the bristleworms 'smell' the bait, they crawl through the grid and become unable to escape. That's the theory, at least. In practice, I have found that, if left in the tank too long i.e. overnight, the bristleworms will eat the bait and escape! Far better to set the trap about half an hour after lights out and remove it some 40 minutes later when the majority of worms will be enmeshed, and then re-set it. By attaching some dark thread to the trap, it can be removed easily without ever having to touch the stinging creatures.

Bristleworms will not stray far from their chosen crevice and consequently the trap will need to be moved around the aquarium to various likely locations. Once the catch has been reduced to insignificant amounts, activities can be suspended for a month or two and then tried again, thus constantly monitoring the population.

Tip: Overfeeding is the most likely cause of excessive bristleworm populations; if this is the case, try reducing food input by at least one half.