Like its terrestrial neighbour, The Mantis Shrimp (Odontodactylus spp.) is a dangerous and cunning predator. It secretes itself in holes within living rock and more often than not finds its way into the aquarium via that same route. Indeed, some consignments of living rock can be so dense with them that one can be found in almost every hole. The adult size of this shrimp can vary widely within a range 2-12" (5-30cm), depending on species.

Whilst hovering at the entrance to its resident hole, the mantis shrimp can flash out club-like appendages at anything considered edible passing within range. Fish, crustaceans, molluscs, aquarist's fingers(!), all can fall foul of this voracious hunter.

Once their presence is established, extracting a mantis shrimp can be a frustrating task. The entrance to their hole can be blocked, however the shrimp always seems to have a backdoor by which it can escape and only keen observation will enable both entrances to be sealed simultaneously. Once this has been done, it is a simple matter to remove the rock and dispose of the offending shrimp.

Mantis shrimps must never be underestimated though, for they are intelligent and quick to learn. They can avoid capture by quickly slipping from one location to another if the first attempt proves unsuccessful. Traps rarely, if ever, work and the final solution may involve removing each rock in turn to another tank and extracting the shrimps with a sharp implement.

If living rock is purchased, especially in any quantity, there are almost certain to be Mantis Shrimps hiding in the crevices somewhere. To avoid trouble later on, 'cure' the rock by housing it in a separate pre-matured aquarium set-up and inspecting for shrimps (Mantis and Pistol) at regular intervals.

Once caught, it seems a shame to destroy such an intelligent, interesting and some would say attractive creature. They are easily maintained as pets in a small covered acrylic tank with nothing more than a sponge filter, some porous rocks to hide in and a supply of frozen or live river shrimp.

Warning: Mantis shrimps possess an alternative common name of 'Thumb Splitter' for very good reason. Their appendages are quite capable of damaging inquisitive human thumbs and fingers alike! When searching for these creatures, always wear thick rubber gloves (or several layers of thin rubber gloves) to avoid injury. If kept as pets, they must always be fed with aquarium tongs and children must never be allowed to put their fingers into the tank. 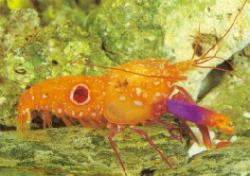 Pistol Shrimps (Synalpheus sp.) are very annoying but easy to perceive! In the aquarium, they produce a sound with their appendages not unlike the crack of pistol fire! This could also interpreted as glass cracking and can be very disconcerting, to say the very least.

Pistol Shrimps stun passing fish by this sound and some marinists will find their tanks gradually depleting in small fish if Pistol Shrimps are present.

The same as for Mantis Shrimps.